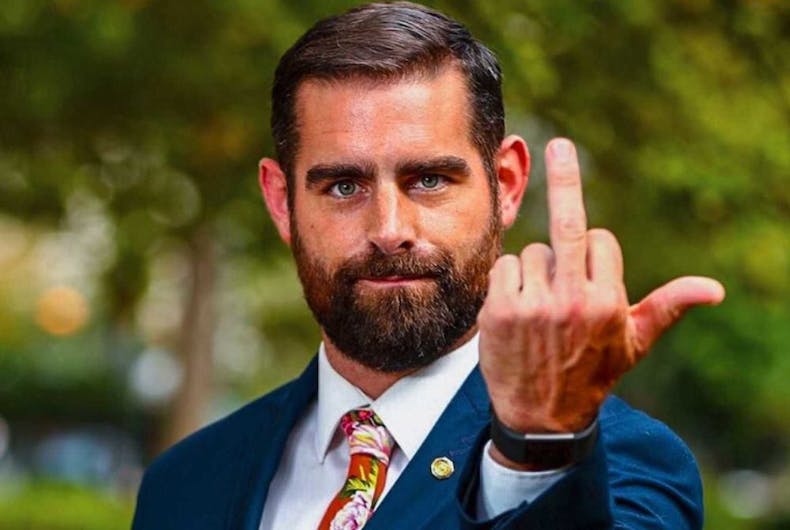 You can’t say he was vague about it. At this point, we couldn’t agree more.

The outspoken legislator lashed out at the vice president on Pence’s visit to Sims’ home district.

“To be clear, we’re a city of soaring diversity,” Sims wrote on social media. “We believe in the power of all people to live and to contribute: black, brown, queer, trans, atheist, immigrant, we want you and we’ll respect you.

“So keep that in mind while you’re here raising money to attack more families, spread more lies, blaspheme with your bible, and maybe even talk to a woman without your wife in the room. We have plenty of them, and they’re pretty much all more powerful and more real than you have ever been.”

OFFICIAL WELCOME: @MikePenceVP let me be the first to officially welcome you to the City of Brotherly Love and to my District! We’re a City of soaring diversity. We believe in the power of all people: Black, Brown, Queer, Trans, Atheist, & Immigrant. So…get bent, then get out! pic.twitter.com/G9eLrXgeVn

Pence, so anti-LGBTQ that the Human Rights Campaign has a detailed guide to his bigotry, has drawn growing protests across the country. In Columbus, Ohio, last week, his visit was timed with Pride, no less, and a big block party blasted tunes outside the venue.

In Philly, hundreds of protesters shamed Pence and the Trump administration for separating immigrant children from their families.

Sims didn’t just flip him off and hide. He spent Tuesday afternoon and evening responding to — and debunking — the predictable replies to his post.

If it’s a shock to see his dramatic approach, you’re not following Sims, now with 27,000 Twitter followers.

Elected to the 182nd district of the Pennsylvania House of Representatives in 2012, the 39-year-old Democrat is a rising star in gay politics. On the one hand, he’s a former college football player who channels his inner Arial with a dashboard Disney rendition from “The Little Mermaid.” On the other, he’s unabashedly outspoken in calling out statehouse conservatives for religious bigotry.

His smile, his beard, his robust stances on progressive issues make him the kind of guy with whom you’d pull up a chair, pop open a beer and watch the Philadelphia Eagles.

Yes, we’ve fretted about other outrageous gestures of protest against Trump on the national stage — Robert De Niro’s “fuck Trump” at the Tony Awards, and Kathy Griffin’s beheaded Trump and feckless c**t ‘Melanie.’

But there’s a sliding scale on profanity, and as we slide further into Trump’s swamp, we see some substance to Sims’ sizzle, especially when we put it in local context.