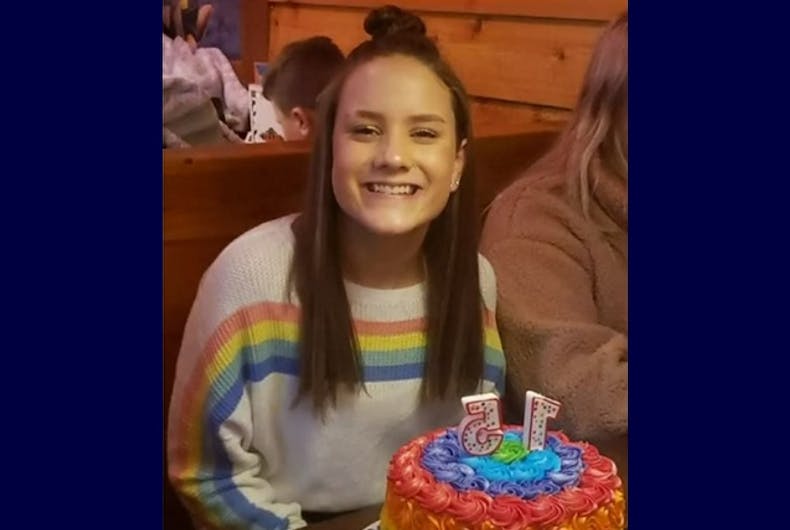 The parents of the 15-year-old girl who was expelled from a Christian school for wearing a rainbow sweater and eating a colorful cake are suing the school for breach of contract and a conservative magazine for invasion of privacy and defamation.

Earlier this month, Kayla Kenney celebrated her 15th birthday. Her mother, Kimberly Alford, posted a picture of her at a restaurant in front of a cake while wearing a rainbow sweater. The cake, according to the bakery that sold it, had “assorted” rosettes.

The conservative Christian school she attended – Whitefield Academy in Louisville, Kentucky – expelled her because the picture with the rainbow cake and sweater “demonstrates a posture of morality and cultural acceptance contrary to that of Whitefield Academy’s beliefs.”

That probably referred to the school’s code of conduct, which says that “homosexual orientation” is “in opposition to the Biblical lifestyle the school teaches.”

“They made an assumption about a child’s sexual identity based on a birthday cake and a sweatshirt,” said attorney Georgia Connally, who is representing the parents.

In the week since her story got national attention, Whitefield Academy issued a statement saying that she had already been disciplined for other code of conduct violations, like smoking an e-cigarette at school and cutting school during lunch.

The parents’ complaint says that school officials told them that Kenney should have refused to eat the cake because of its assorted colors.

The parents say that school policy on discipline involves four steps to give students “an opportunity for mercy and grace through contrition,” a process the parents said the school did not adhere to with their daughter, who is now attending a public school.

The lawsuit also says that the school violated Kenney’s privacy by going to the media.

“The school went to the media to defend themselves,” Connally said. “They have a privacy policy, a confidentiality policy, that’s also in the contract, and they didn’t follow it. And that put a child in harm’s way.”

American Conservative magazine editor Rod Dreher is also named in the complaint. On January 17, he published an article entitled “Rainbow Cake Girl: The True Story,” where he said that “two people who are close to the situation” told him that Kenney sexually harassed two girls at the school and that she was out as bi.

Dreher also posted pictures from Kenney’s Instagram – without permission, according to the parents’ complaint – which he said prove that she is bi or gay.

While none of this disproves any element of the story – that Kenney was expelled because of the Facebook picture of her in a four-striped rainbow sweater sitting next to a colorful cake – Dreher claims that it’s proof “the media read what it wanted to read into a story involving a conservative Christian school, and slandered them in the name of progressive values.”

“Kayla and her mother were plainly trolling Whitefield’s administration with that rainbow cake,” Dreher claimed, citing no proof that Kenney or her family intended for school administration to find the picture or that they bought the cake and sweater because they’re Pride symbols (which they’re arguably not, since the cake isn’t really a rainbow and the sweater only has four stripes, not six like the Pride flag).

The lawsuit accuses Dreher of outing their daughter with pictures from her social media accounts that he didn’t have permission to use. It says that Kenney’s parents didn’t know she was bi or gay before the incident and that she wasn’t ready to come out.

But she “has been forced to abruptly confront her identity” because of Dreher’s posts. They also say that the accusation of sexual harassment is defamation.

“[Kayla] is a child who has been harassed and mistreated by a school that her parents paid and trusted to keep her safe,” the complaint says.