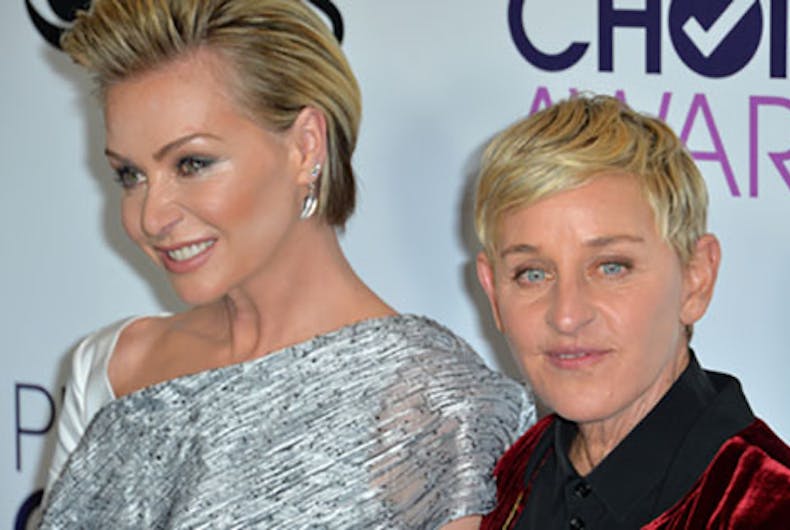 Amid reports that Ellen DeGeneres and her wife of nearly 9 years have been observed in embarrassing fights on the set of her show, caught looking glum at dinners out on the town in addition to their decision to sell their magnificent weekend getaway mansion in Santa Barbara, tongues are wagging in Hollywood that a breakup is looming for the hot power couple.

Life&Style News, a supermarket-style tabloid site published by the same fine folks behind those high-minded journalism icons Women’s World and the Soaps In Depth magazines, is making its latest dumpster dive for clicks with unsubstantiated claims about the alleged marital troubles of the daytime talk show host and her actress/model wife.

Oh, and of course — it’s exclusive. Among the latest claims, one solitary “source” who’s reportedly “close to the couple” told the site “the pair is struggling once again, despite attending therapy following their last rough patch.”

They’ve been trying really hard to keep their marriage together, but it seems like time is running out.

And shocker among shockers, Life&Style breaks new ground with its reporting that the couple married almost a decade years ago is — brace yourself, dear reader — arguing about how they’d prefer to mark the occasion.

“Ellen wants to plan an elaborate anniversary and Portia just wants her to concentrate on fixing their marriage,” the insider said, probably breathlessly. “She feels like Ellen puts a Band-Aid on their problems.”

Um, point of order: couples on the verge of breaking up don’t plan anniversary celebrations. Or even “concentrate on fixing their marriage,” they find lawyers and get the hell out of there.

To prove its point, the site also dredged up some heated words between DeGeneres and de Rossi that studio workers couldn’t help but witness — and then tell tabloid reporters about, back in March. Let’s not forget that not smiling is also apparently a sign your marriage is on the rocks, as Life&Style taught us with this paragraph revealing the “tension” also has been observed by the general dining public:

During a recent outing at Craig’s restaurant in West Hollywood, the couple was definitely out of sync. “Ellen seemed miserable and Portia just looked sad,” one patron told Life & Style, while a staffer added, “‘Happy’ isn’t the first word I would use to describe them.”

Of course, we’re not immune. We, too, reported on the “food fight.” And no, we’re not apologizing, just pointing out that right now, it’s all gossip. There is no “there” there. Yet.

Until such time as one of their representatives comes out and confirms they’re “miserable” or separating or splitting-up for good, we will label this just what it is: gossip.

And yes, there’s no denying everybody loves gossip… except of course the people being gossipped about.