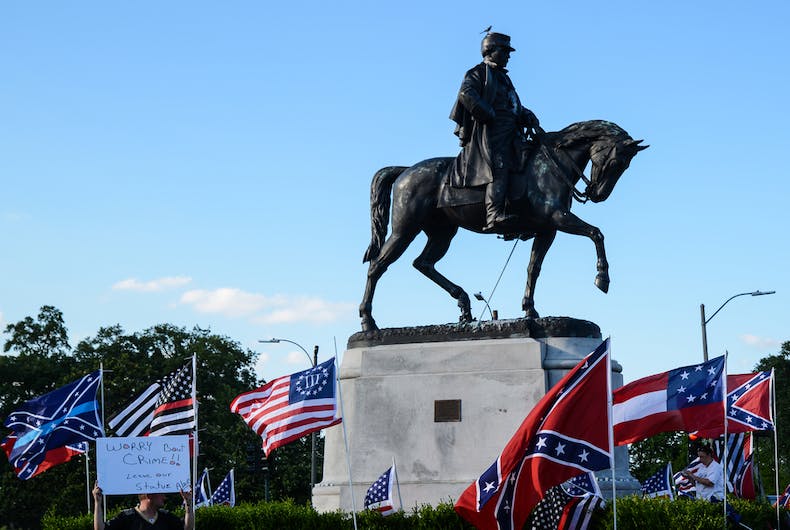 The General P. G. T. Beauregard Equestrian Statue in New Orleans, Louisiana. The statue was removed in May, 2017.Photo: Shutterstock

Controversy has been swirling around a long-overdue public debate whether to change the name of the Washington Redskins football franchise. On one side, some news outlets, like the San Francisco Chronicle, announced back in 2013 that they will no longer use the word “Redskins” when referring to the team. Also in 2013, the Washington, D.C. City Council voted overwhelmingly to refer to the team’s name as “racist and derogatory.”

According to an October 16, 2013 Press Release by the American Indian Movement (AIM) Twin Cities (Minneapolis and Saint Paul) calling for a protest at the game between the Minnesota Vikings and the Washington “Redskins”:

“The continued use of American Indian likenesses and images by sports teams has resulted in widespread racial, cultural and spiritual stereotyping which promotes hatred and disrespect of American Indian people. Using American Indian slurs like ‘Redskins’ is no different than the use of Black Sambo which offended African Americans or the Frito Bandito which is offensive to the Hispanic community.”

The press release went on to demand: “Retire the racist attire! Recognize that American Indians are a living people, not mascots for America’s fun and games!”

The team originally took the name “Boston Braves” at its inception in 1932, but changed it one year later to “Boston Redskins.”

At the center of this maelstrom, team owner Daniel Snyder is holding firm by announcing he has no intention of changing the name, referring to it as a “tradition” and as a “badge of honor.” In fact, on the wall of the organization’s Ashburn, Virginia, offices hangs a commemorative plaque given to the team’s former coach, George Allen announcing:

Washington Redskins is more than a name we have called our football team for over eight decades. It is a symbol of everything we stand for: strength, courage, pride, and respect — the same values we know guide Native Americans and which are embedded throughout their rich history as the original Americans.”

Daniel Snyder needs to turn the tables by imagining the name of his team as the “Washington Blackskins” under the team symbol of the Confederate battle flag.

The Southern Poverty Law Center found a current total of 1,503 Confederate-related symbols across the United States, including:

Under increasingly intense pressure, South Carolina led the way in 2015 by removing the Confederate flag from the State House grounds where it had hung since 1962. Other cities slowly and often reluctantly followed suit. Those on the other side of the issue who demand retaining these monuments and symbols argue “tradition” since they are a part of their “heritage,” and they represent an era of American history.

These emblems and personalities do, in fact, represent an era of American history, an era of war over the right to continue the enslavement of other human beings, one in which many Southerners believed they had the “God” given right to torture, work to death, separate families, rape, and otherwise abuse others for their own economic, social, and cultural benefit.

Most certainly, these monuments and symbols represent “tradition,” but a tradition worth remembering only as one of the leading shameful eras in our national story, and not as one to romanticize or admire.

These symbols actually inspire people to violence while for many others, they bring to the surface a legacy of oppression and pain. The monuments and symbols empowered, for example, 21-year-old avowed white supremacist Dylann Roof who brutally and without any sign of remorse murdered nine African American parishioners at the historic Emanuel A.M.E. church on June 17, 2015. Roof was depicted in several on-line photos some in which he carried the Confederate battle flag in one hand and a gun in the other.

In addition, an estimated 1500 white supremacists and neo-Nazis recently march on Charlottesville, Virginia carry Confederate flags, Nazi symbols, and other racist and anti-Semitic regalia in protest of the town’s proposed to remove the statue of Confederate General Robert E. Lee. The rally resulted in extreme violence and the murder of a young woman and death of two state police officers.

Under the guise of preserving “tradition,” proponents of keeping Confederate symbolism fail to realize that most of the monuments were erected well after the Civil War toward the end of the 19th– and into the 20th-century. Southerners imposed these monuments primarily as a weapon of intimidation against black people in the Jim Crow South during what has come to know as the “Redemption Period.”

The so-called “Redeemers” included a coalition of the southern faction of the Bourbon Democrats: a very conservative and pro-business arm of the Democratic Party whose stated goal of “redemption” was to rid the South of liberal Republicans, northern “carpetbaggers,” and “scalawags” (poorer non-slaveholding whites).

While literally millions of First Nations people inhabit the United States today, they as a group remain largely invisible to most other U.S.-Americans. The image of so-called brave “Redskins” in football and “Braves” in baseball, and countless other sports teams were constructed through a historically revisionist and romanticized lens, back to some fairy-tale time and place where the European “settlers” (a.k.a. “invaders”) broke bread in some mythological first Thanksgiving with “the natives,” where all was fine forevermore.

In fact, European-heritage people actively deculturalization, robbed them of their land, and committed genocide on native peoples, and the cultural descendants of the Confederacy – descendants of those willing to wage war to ensure the continued enslavement of other human beings — strikes as hypocrisy at best, and more like justification for further colonization and misappropriation of cultural symbols, in addition to racist stereotyping.

As a genuine step in the direction of truly honoring and respecting other people, the cultural imperialism must end.

Tear down and change the sport’s team and school names that misappropriate First Nations’ cultural and spiritual heritage. Tear down the monuments and other symbols to the Confederacy. Place these in museums as reminders of a disgraceful past, one that we must remember so we don’t repeat. 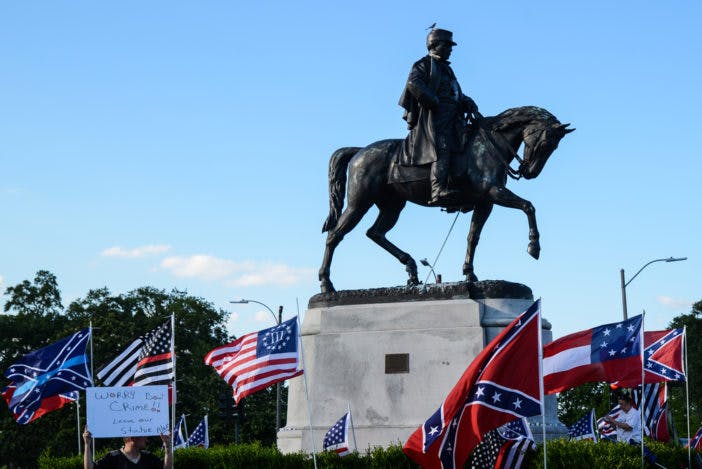