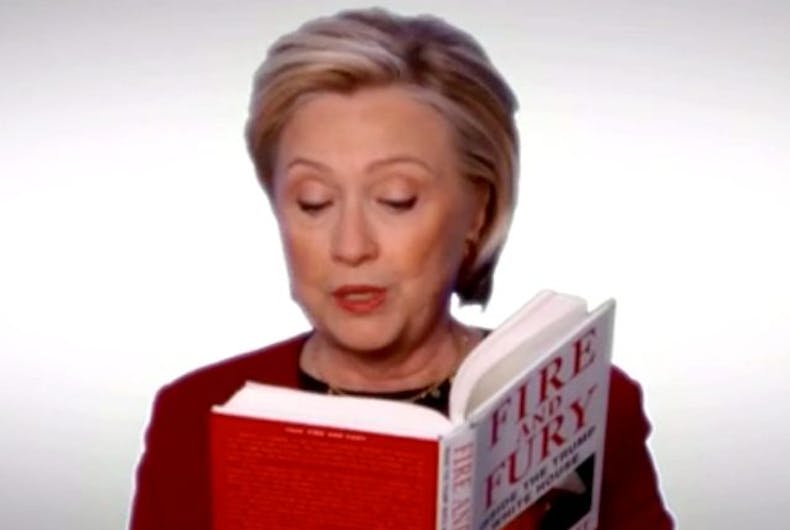 The sketch was ostensibly about host James Corden hoping to win next year’s Best Spoken Word Album award with a reading of Michael Wolff’s Fire and Fury: Inside the Trump White House.

The book, based on over 200 interviews with Trump and his associates, details Trump’s erratic behavior and concludes that “100% of the people around him” believe he is unfit for office. The Trump Administration contends that the book is inaccurate and the White House even sent cease-and-desist letters to Wolff and his publisher.

Cher, Snoop Dogg, John Legend, Cardi B, and DJ Khaled also participated in the sketch, which high-lighted some of the more bizarre passages in the book.

Grammy producers said that they have been talking with Clinton about the sketch for a few weeks, and they filmed it last week in New York City. She read one of the best-known passages about Trump’s love of fast food:

He had a longtime fear of being poisoned. One reason why he liked to eat at McDonalds. No one knew he was coming and the food was safely pre-made.

On the hunt for a GRAMMY Award of his own, James Corden auditions celebrities for the spoken word version of Michael Wolff’s “Fire and Fury.” pic.twitter.com/SjTobAbv2N

The burn must have been sick, because on Twitter this morning, the tears were real.

Another self congratulatory award show has highlighted how pathetic and disgusting today’s so-called stars are. But it’s not just the Grammys, I’m through with all of them. And I’m not usually a boycott guy.#BoycottGrammys#BoycottOscars#BoycottHollywood#BoycottNFL pic.twitter.com/DxSrqlz4rN

I have always loved the Grammys but to have artists read the Fire and Fury book killed it. Don’t ruin great music with trash. Some of us love music without the politics thrown in it.

Donald Trump Jr. joked about how the sketch was Clinton’s “consolation prize,” which shows about how seriously the Trump family takes the job of president.

Getting to read a #fakenews book excerpt at the Grammys seems like a great consolation prize for losing the presidency. #GrammyAwards

Fox News host Tomi Lahren said the sketch showed that musicians are “out of touch” with Americans. Except… 56% of Americans disapprove of Trump.

These award shows are a perfect example of how out of touch the celebrity elite are with the average American. While they are mocking Donald Trump, he is busy working for the American people and winning for the AMERICAN people. #Grammys

Bill O’Reilly, who was starkly political for years on a “fair and balanced” channel, boo-hooed about all the partisanship on the Grammys.

CBS made a major mistake allowing Hillary Clinton to bash President Trump during a skit on The Grammys. Satire is one thing, stark partisanship is another matter, a serious matter for a network that is supposed to broadcast fairly. No Spin analysis on https://t.co/fqUvO5EEW0.

There are so many tears on Twitter right now. Most conservatives were just hurt that not everyone agrees with them.

That whole grammys was a shit show. Loaded with self centered better then thow attitudes. These people make me want to barf.

Because conservatives never act like they think they’re better than others… like minorities, LGBTQ people, immigrants, the unemployed, the poor…. 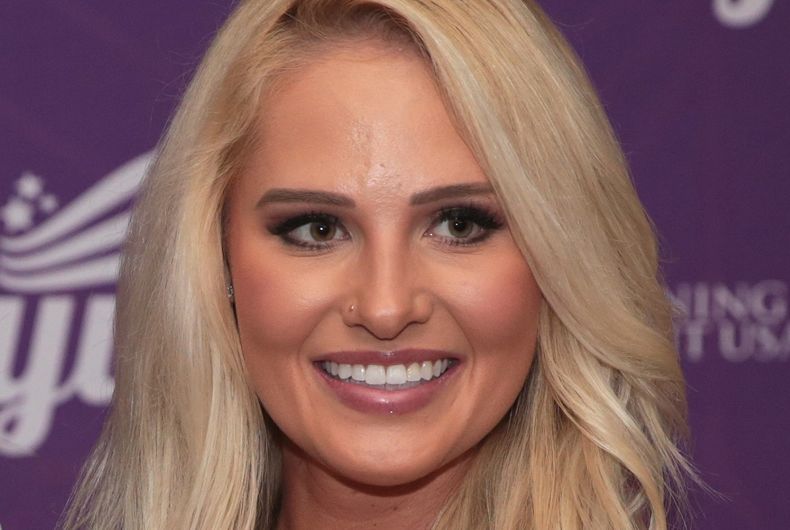 Tomi LahrenPhoto: Gage Skidmore via Wikipedia Fox News host Tomi Lahren became the laughingstock of Twitter after she said that she was the victim of…