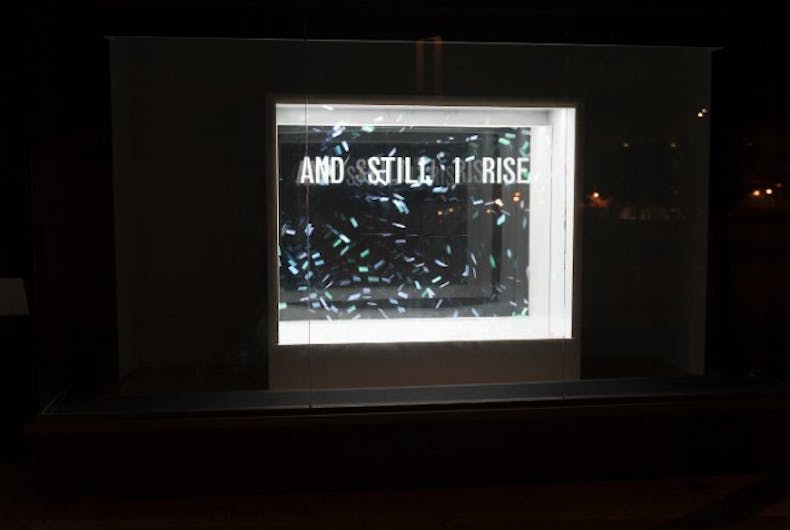 Artist Bunny Burson spent all night waiting on confetti to rain down from the ceiling at Hillary Clinton’s election night party in New York. As the night wore on and it became obvious there would be no celebration that night, only dark thoughts flew through the building.

“Hillary Clinton has been a beacon for me really as a woman,” Burson told CNN. “That’s really where I thought that this was going, to be the election of all elections to inspire women.”

While she could have succumbed to depression, instead Burson took that darkness and made it into a beacon of hope for women everywhere.

She spent weeks tracking down the confetti that wasn’t used during Hillary Clinton’s party. Eventually found 200 pounds of it packed up in boxes in Chicago and bought it all.

Back home, she turned the confetti into a giant “snowglobe” with the confetti continuously falling and rising again inside as a powerful reminder to women that, even in loss, they will always be able to pick themselves up and rise again.

Exhibited in St Louis in a window of the Bruno David Gallery, the piece’s aspiration title gives away the meaning.

“I want women and little girls to just don’t feel defeated by this,” Burson told CNN. “Keep going. Keep fighting. I just feel whether it’s running for office or breaking their own glass ceiling in some other way, now’s a time not to give up.”

The remaining confetti is being used to make smaller versions of the snowglobe that will be for sale at local Planned Parenthood facilities. All profits will go directly to the women’s healthcare provider.