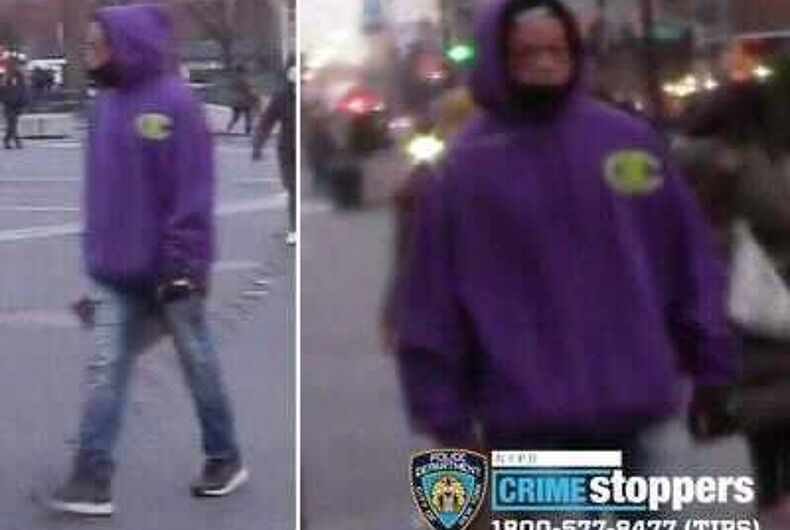 The assailant in an allegedly anti-gay attack in Union Square Park, Manhattan. The NYPD believes the assailant is wearing a purple hoodie, blue jeans and black sneakers.Photo: NYPD CrimeStoppers

New York City police are on the search for an assailant that allegedly threatened a stranger and punched him in the face while making anti-gay statements.

The incident took place in the afternoon on January 21, 2021 on the north end of Union Square Park.

Reports indicate that between 2 p.m. and 5 p.m., the victim was filming a video in the city’s mainstay when a man unknown to him began to lash out. The assailant allegedly came after the victim, calling him “you fucking homo” while harassing him.

He then told the victim, “I’m going to kill you” before swinging a fist at him and leaving him with a bruised mouth.

The assailant then remained at the park, not even attempting to flee after the brazen attack in broad daylight.

The “hooded homophobe” was not arrested, however. He left while the victim, a 45 year old man, remained bruised and in pain while simply filming in the park, sources revealed to the New York Daily News.

The 13th Precinct of the New York City Police Department (NYPD) is investigating. They have released pictures of the suspect from footage apparently gathered by the victim.

Investigators believe the assailant was wearing a purple hoodie, blue jeans and black sneakers during the attack. They also believe he’s between 25- and 30-years-old.

They urge anyone with information to contact NYPD Crime Stoppers. A reward of up to $2,500 is being offered.

Police have not indicated that they will investigate the incident as a hate crime.

The NYPD is asking for the public’s assistance in identifying the following individual wanted in connection to an assault that occurred inside Union Square Park on 1/21/2021. If you have any info in regards please contact the 13th Squad or @NYPDTips #800577TIPS. pic.twitter.com/Zh7Mf8SL2w

WANTED for ASSAULT: Do you recognize this individual? On 1/21 at approx. 2:00 PM, inside Union Square Park in Manhattan, the suspect punched and made anti-gay statements to a 45-year-old male victim. Have any info? Call or DM @NYPDTips at 800-577-TIPS. All calls are anonymous. pic.twitter.com/AjKR2qqJbi 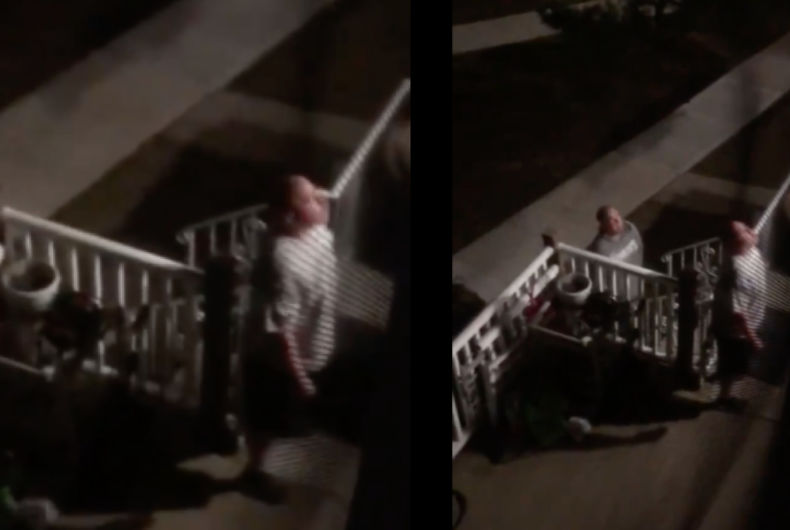 “Hooded homophobe” threatens to kill victim & punches him in the face