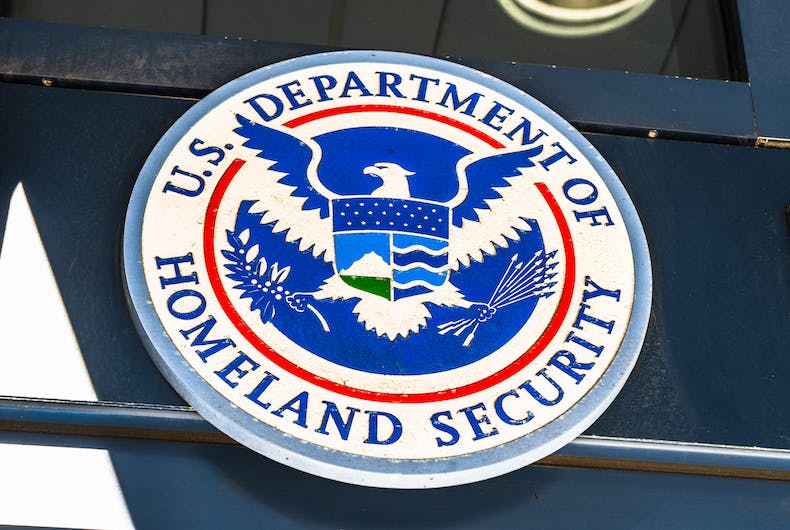 U.S. Department of Homeland Security Seal located at one of their buildings in downtown San Francisco.Photo: via Shutterstock

44 House Democrats have submitted a letter to the Department of Homeland Security (DHS) and Immigration and Customs Enforcement (ICE), formally asking them to release all transgender detainees from their custody. The letter asserts that ICE’s detainment and judicial procedures are disproportionately harming trans people, citing recent evidence of rampant sexual abuse of trans inmates.

“The United States is bound by domestic and international law to protect — not punish — vulnerable populations escaping from persecution,” the letter reads. “We demand that ICE abide by these laws by immediately bringing facilities detaining transgender individuals into compliance, and by arranging for release of transgender individuals at risk of sexual abuse and assault in ICE custody.”

Related: Pride organizers send Google, YouTube to the curb over homophobia and bias

“In the United States and around the world, transgender individuals face persecution that ranges from physical and sexual violence to other forms of mistreatment based on their gender identity and expression…this already vulnerable population faces a heightened and unique set of injustices while in immigration detention.” the letter iterates. It also slams both departments for not complying with ICE’s own 2015 directives, which sets forth guidelines in respect to supervising and respecting LGBT detainees.

There is only one facility explicitly for transgender people in ICE custody, located in Milan, New Mexico. In June 2019, 29 inmates housed there wrote a letter complaining about the medical care they receive and mistreatment by DHS employees.

A year ago, the ACLU and other civil rights organizations also called out ICE’s intentional transphobic treatment toward trans women at a nearby ICE facility in Chaparrel, New Mexico, even saying that the correction officers forced them to stay in facilities with men where they were subject to sexual harassment. Their letter, too, ask for the release of all transgender inmates in addition to HIV-positive and other LGBTQ inmates.

The House Democrats’ letter also denotes that these inmates are more vulnerable to violence behind bars, writing that “LGBT people in ICE custody are 97 times more likely to be sexually victimized than non-LGBT people in detention.” They specifically name two trans women detainees of ICE facilities who have died – Roxsana Hernández, who passed from AIDS-related complications on May 25, 2018, and Johana Medina León on June 1, 2019. Hernández was sick in custody for 12 days without treatment. León had come to the country to file for asylum, and was not here illegally – yet, she was preemptively detained by ICE, and died days after her eventual “parole”.

In a statement, Quigley criticized ICE even further for its treatment of detainees within its facilities.

“Immigrants who have faced fear and violence in their pursuit of a new life in the United States should not be confronted with more fear and threats of violence when they arrive at our borders,” Quigley said. “If ICE cannot provide appropriate and humane accommodations for these migrants, they must release them from detention. No one else should have to lose their lives because of ICE’s cruel mismanagement.”

The Las Americas Immigrant Advocacy Center, who joined the ACLU in their letter, provides research on trans inmates of DHS and ICE that is evident of how different they are treated. For example, trans inmates spend an average of 99 days in ICE custody, which is double the length of non-transgender detainees. They also are sent to solitary confinement more than any other group.

Quigley and the Democrats are requesting that ICE either complies with its own regulations – and provide a response with “a detailed plan” by January 27 – or release all trans inmates at that time.