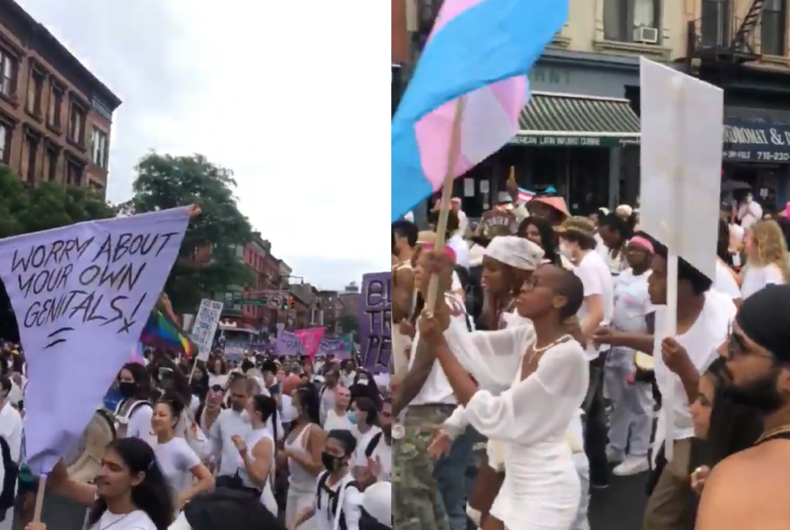 Donned in white and carrying signs such as “worry about your own genitals,” hundreds danced and marched down the streets of Brooklyn for the second annual Brooklyn Liberation March.Photo: Screenshot/Twitter

The Brooklyn Liberation March was held outside the Brooklyn Museum in honor and solidarity with trans people for the second year in a row this past weekend.

This year, in light of the wave of anti-LGBTQ legislation being enacted around the country, people came out to the LGBTQ people-led event and marched, danced, and rallied for hours.

One was held last year, mid-pandemic, just weeks after the death of George Floyd and other LGBTQ people and people of color due to police brutality, like Dominique Rem’mie Fells, Riah Milton, Tony McDade and Breonna Taylor.

An estimated 15,000 showed up last year, and many of them returned this year for another chance to stand up for other trans and queer people. Last year’s also influenced politicians to eventually try repealing the “walking while trans” ban that allowed trans and queer people to be targeted based on their appearance around New York state. It was officially repealed in February.

This year’s march, held yesterday on June 13, had a clear emphasis on defending trans youth and trans people of color, who are facing a record number of anti-LGBTQ legislation across the country in addition to the already persistent problems of police brutality and discrimination.

“We are not working with police, we are not asking for a permit. We are going to be setting up guerilla style,” co-organizer Eliel Cruz told them. “We just want people to know we are purposefully trying to create some type of disruption in order for people to pay attention to what’s happening.”

“HEY TRANS KIDS: WE GOT YOUR BACK!” the organizers wrote on their website, noting the more than 100 proposals considered in at least 34 state legislatures since January.

“TRANS YOUTH ARE UNDER ATTACK. SHOW UP AND FIGHT BACK.”

this year’s Brooklyn Liberation is specifically focused on trans youth, who organizers say face a “state of emergency” in this country pic.twitter.com/CJPBmjz8vu

Long-time activists and community figures like Raquel Willis and Schuyler Bailar were in attendance, among others.

“Trans youth absolutely deserve to play sports just like I did, just like I do,” Bailar told the crowd. “Trans kids deserve that space.”

“When we talk about the epidemic of violence plaguing Black trans women and brown trans women, that is so tied to the violence and the psychological distress that trans youth are facing,” Willis said.

She added, “When we showed up last year in the interest of elevating Black Trans lives, I think all of us knew that this was going to be an ongoing commitment.”

We will not allow for any systems to continue to brutalize, to demonize, to continue to criminalize the most marginalized people,” trans woman and organizer of protests at Stonewall, Qween Jean, also implored. “It must end now.”

Part of the event was streamed online via Twitch, and attendees’ footage and photos took over social media.

New York City mayoral candidate Maya Wiley said on Twitter, “This is the kind of love and visibility that I want for every Black trans kid.”

Great running into some friends (@bradlander + @elisacresponyc) at the Brooklyn Liberation march this afternoon.

Nice to see our next Comptroller showing up and standing in solidarity with our Black Queer and Trans siblings! 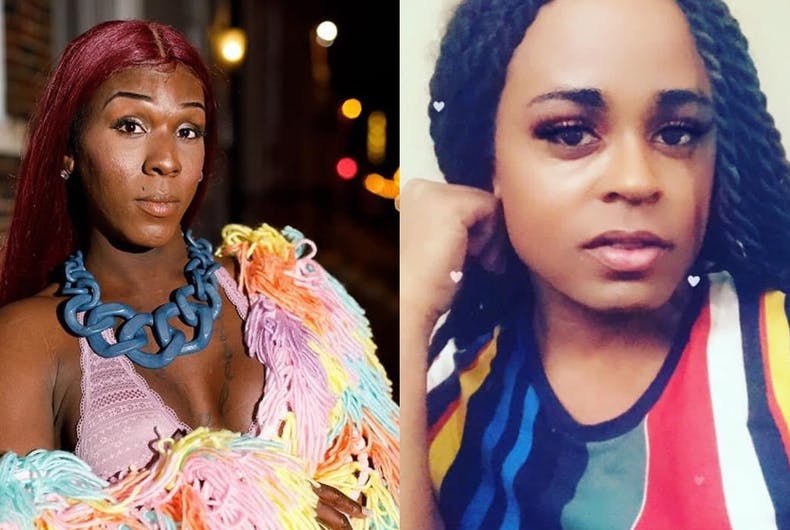