Sesame Street’s most famous duo, Bert and Ernie, first appeared in 1969 – the same year as the Stonewall Riots, which to the nation’s surprise catapulted the LGBTQ liberation movement. At that time, the idea of partnering these two lovable striped-sweater-wearing puppets as gay was as inconceivable as the idea of legalized same-sex marriage.

But four-plus decades later with Bert and Ernie’s relationship outliving many heterosexual living arrangements―roommates or married―and mirroring the subtle ways in which LGBTQ couples discreetly went about their lives back in the day, the question of whether the guys are gay is not only apropos, but so, too, is the question of their nuptials.

In an interview with our sister site, Queerty, former Sesame Street writer Mark Saltzman confirmed that he wrote the characters based off his real life relationship with his partner.

“They are not gay, they are not straight, they are puppets,” President and CEO of Sesame Workshop, Gary Knell responded. “They don’t exist below the waist.”

The funny thing about the dominance of heteronormativity in society, I’ve learned as a lesbian, is that it is always assumed―whether it’s above or below the waists of people (or puppets). And, oddly, heteronormativity is also assumed without questions, expected without exception, and explained even in its silence.

But Knell is not entirely truthful in his reply that the puppets are neither gay nor straight.

My favorite Jim Henson Muppet is the over-the-top heterosexual prima donna, femme fatale, and sex-siren Miss Piggy. And the love of her life, Kermit the Frog, unwittingly marries her in The Muppets Take Manhattan.

Sesame Street has always moved and grooved with the times. Its concept of “Muppet diplomacy,” a term coined to depict the show’s efforts to educate children around the world.

They have tackled tough social issues like HIV/AIDS, child obesity, 9/11 and military deployment; Muppets have danced and sang with mega rock stars and hip-hop artists like Bono, Beyonce, and Justin Bieber.

Is it possible that my “gaydar” is off about Sesame Street? Perhaps. But hasn’t the show – in a tongue-in-cheek fashion – given a wink and a nod to the queer community over the years?

Openly gay guest stars like Neil Patrick Harris played a “shoe fairy,” and will.i.am of the “Black Eyed Peas” sang “What I Am?,” a song about self-acceptance, creating an online kerfuffle about its underlying message.

Is it now time for Sesame Street’s under-the-radar winks and nods to the LGBTQ community be replaced with a full-throated statement of support?

Sesame Street has a long history of teaching children about diversity and acceptance. Why should the issues impacting our LGBTQ children be excluded? Moreover, many of the children watching the show are not only LGBTQ, but so, too, are their parents and households.

In other words, could it be that Sesame Street needs to come out of the closet?

In many ways, their famous duo has. And Bert and Ernie have not only been roommates, but they have also been sleep-mates, sleeping next to each other like any long-term committed couple.

I realize, however, in a culture that constantly sexualizes the coupling of same-gender relationships as gay, we ignore friendships with our BFF. That is what producers of Sesame Street are stating about Bert and Ernie; they’re just best friends.

For over two decades Oprah and her gal pal, Gayle King, editor-at-large for O, The Oprah Magazine, have denied rumors they are lesbians, but instead have publicly stated they are BFFs, just two sistah-girls being sister-friends.

After 30 years of four-times-a-day phone calls, and frequent sightings of where-you-see-Oprah-you-also-see-Gayle, the public continues to question the two about their relationship.

“No, I’m not a lesbian, I’m not even kind of a lesbian,” Oprah stated on A Barbara Walters Special: Oprah, The Next Chapter.

“The reason why it irritates me is because it means that somebody must think I’m lying. That’s number one,” Winfrey told Walters. “Number two…why would you want to hide it? That is not the way I run my life.”

Constantly labeling same-gender relationships as gay diminishes and distorts the romantic relationships we have with our significant others. It not only wrongly assumes that the only reason for two people of the same gender getting together is for sex, but it also keeps in place the myth of the hypersexual and predatory queer person.

However, Sesame Street’s is an open classroom for our kids, reflecting the times. Same-sex marriage is one of the social issues of the day.

How will Sesame Street explain to children in same-gender families why Miss Piggy and Kermit the Frog can marry, but Bert and Ernie can’t?

I’m going with Mark Saltman’s said that when he wrote Bert and Ernie episodes for Sesame Street, he thought of them as gay. I do too. 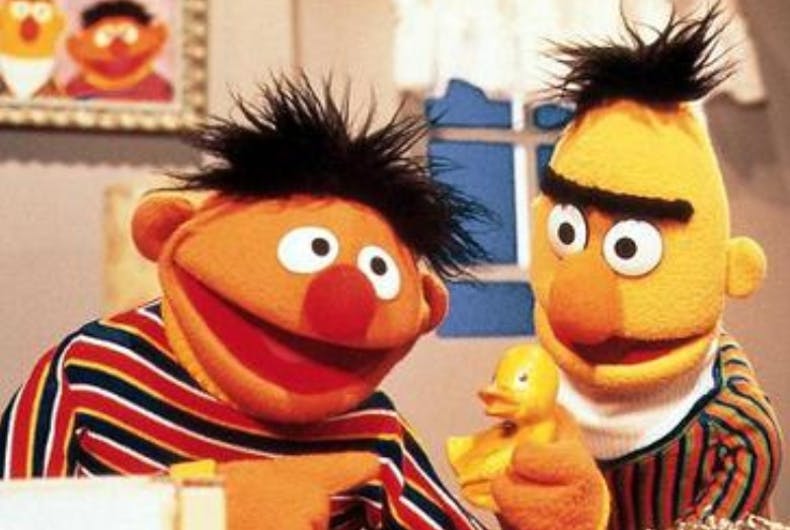 Bert and Ernie and the rubber duckiePhoto: via Wikipedia An astute fan noticed that Bert and Ernie from Sesame Street don’t agree on the nature…

Cancel reply
If Kermit & Miss Piggy are a couple, why can’t Bert & Ernie be gay?