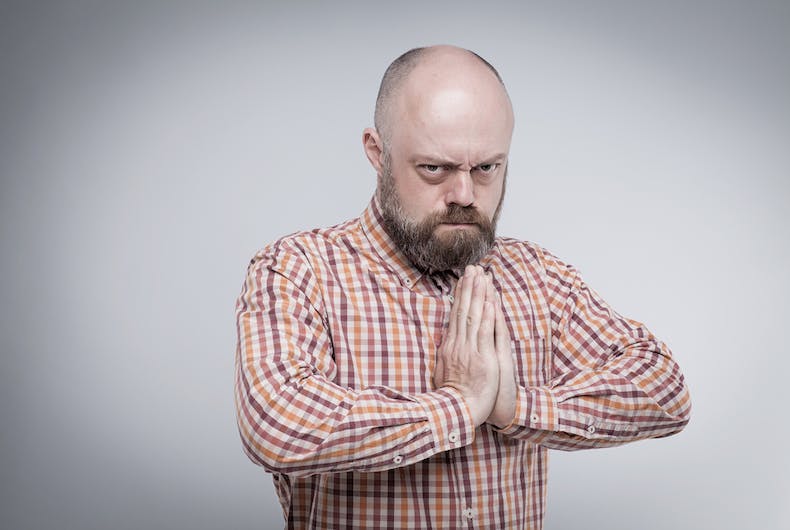 If your religion teaches you to discriminate, you’re following the wrong one.Photo: Shutterstock

Long, long ago in a land far, far away at the world’s Middle East, then under Roman rule, a man with ivory white skin and long flowing blond hair (really, I thought you said he was from the Middle East?) proclaimed:

Thou shall not eateth cake if thou expecteth to marry someone of thine own sex, for it is an abomination. If thou eateth said treat, thou shall burneth in the flames of the deep hot confectionery hellhole for eternity!”

While the historical Jesus of Nazareth never asserted any mention of sexuality, same-sex marriage, or the purchase and consumption of baked goods by gay couples, people with same-sex attractions and love interests have suffered persecution throughout the ages on “religious” grounds.

For centuries, individuals and organizations have employed religious dogma to justify the marginalization, harassment, denial of rights, persecution, and oppression of entire groups of people based on their social identities.

At various historical periods, people have applied these texts, sometimes taken in tandem, and at other times used selectively, to establish and maintain hierarchical positions of power, domination, and privilege over individuals and groups targeted by these texts and tenets.

The United States was founded on Christian justifications for oppression, slavery, interracial marriage, women’s disenfranchisement, and restrictions on voting rights.

“States rights” and “religious beliefs” have long served as the battle cries for state legislators to deny LGBTQ people the rights summarily granted to their heterosexual and cisgender counterparts. Today, no national laws require all states to protect LGBT people from discrimination in employment, housing, public accommodations, counseling, insurance, and other areas.

How can anyone possibly defend the clear and undeniable contradiction between a religion’s commandment, in various forms, to love one’s neighbor as oneself, with a baker’s refusal to bake a confectionery or a photographer’s refusal to preserve joyous moments, or an employer’s refusal to hire a fully qualified and committed employee?

The Supreme Court’s recent 7-2 decision ruling in favor of the Masterpiece Cakeshop in Colorado and the owner’s refusal to bake a wedding cake for a same-sex couple, while limited to the scope of this one case, nonetheless has wide-ranging implications.

Aside from legal issues, what can we infer from those religions that justify discriminatory treatment of other human beings? Religions promoting discrimination against same-sex couples purchasing cakes are religions lacking in moral authority!

Cancel reply
If your religion tells you to discriminate, you’re following the wrong one