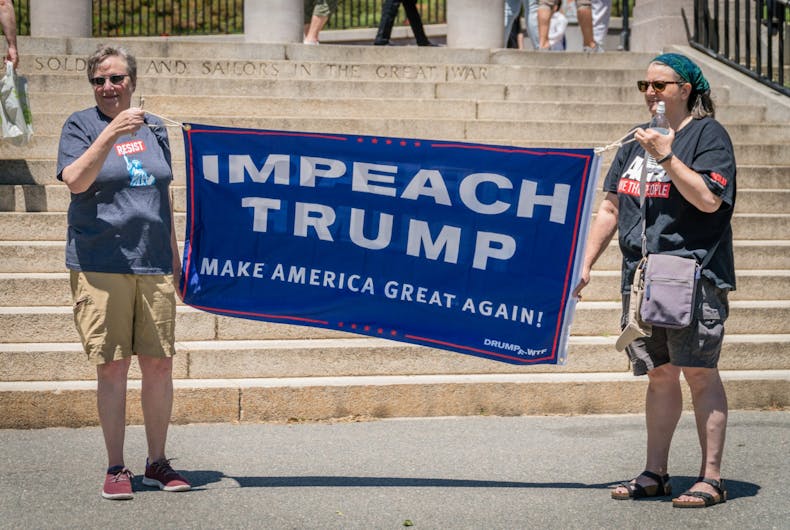 June 15, 2019: Citizens protest to impeach President Donald Trump at a rally held in front of the state capital building in Boston, MA.Photo: Shutterstock

Integrity relates to a person’s high standards of character – their values, honesty, and ethics. Institutions are also assessed in terms of their overarching integrity based on similar qualities.

In the House impeachment hearings and subsequent Senate trial, the concept of this precious notion of integrity must function as our lens of perception in assessing the validity and reliability of the process.

Related: Most of Trump’s impeachment lawyers have strong résumés (of anti-LGBTQ advocacy)

Validity and reliability serve as the two foundational standards on which quality research and the search for truth rests. Validity regards the accuracy of what the research is constructed to measure, while reliability is about the consistency of the research methods or techniques when used in similar contexts or by other researchers.

We must apply “integrity” as our lens of perception in this process. We need to examine individual “players” within the Executive and Legislative branches, prosecutorial and defense teams (each with of their principal members), witnesses, and the Congress as a larger body. We also must not forget to include the press.

The jury has already ruled on the integrity of the primary defendant in the case, Donald Trump. Even his defense team has failed to champion this man’s character or deflect accusations of his dishonesty.

For example, the Washington Post found that Trump has told a documented 16,241 false or misleading statements in his first three years of office. His personal attacks on people with whom he disagrees are legendary, as are the numerous indications that his self-interest will always supersede concerns for the country.

Critical questions remain; questions we must refract through our lens of perception:

At each step along the way as the trial proceeds, each senator must be held accountable for the questions they ask, statements they make, and votes they take on the admission of specific witnesses and documents. Their eventual decision to either convict or acquit this president on the double counts of impeachment will be noted in history.

Their actions will have effects on each of us, including future presidents and Congresses, on the U.S. standing in the world, and on the future of our very democracy.

The players in the drama – and each of us – must work out our own way of maintaining our integrity. If we fall into the psychic traps of self-deception, rationalization, or simply not caring, we will ultimately lose entire pieces of ourselves.