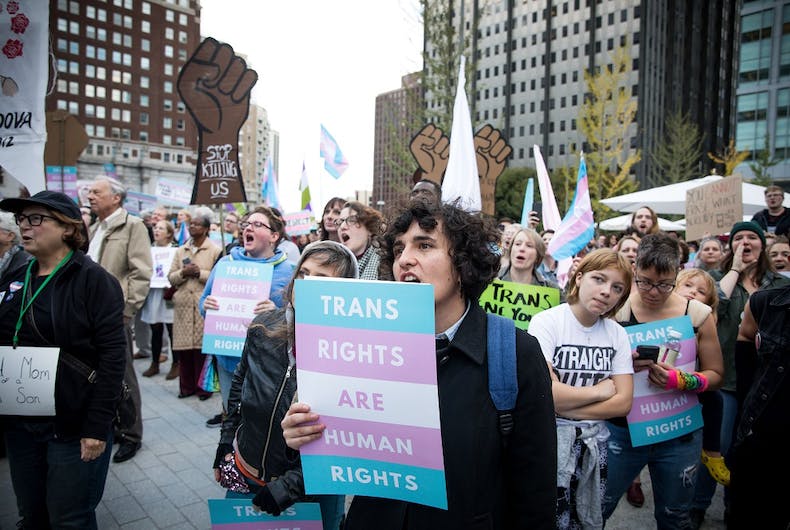 October 23, 2018 – Hundreds gather in Love Park in Philadelphia in response to the Trump administration’s memo that would have legally erased transgender identity.Photo: Shutterstock

A group of nine state representatives introduced HF 2164, which they describe as “an act removing gender identity as a protected class under the Iowa Civil Rights Act.”

In 2007, the state added both sexual orientation and gender identity to its anti-discrimination law, banning discrimination against LGBTQ people in housing, public accommodations, employment, education, and other areas.

Two years ago, a group of Republican lawmakers filed a bathroom bill that would have amended the state’s civil rights act to allow employers and business owners to ban transgender people from bathrooms and other facilities.

That bill, which did not pass, would have left most protections for transgender people in place.

Now Iowa Republicans want to simply take away all protections for transgender people in the state. The bill would remove the phrase “gender identity” from several parts of the law that list protected categories, leaving age, race, creed, color, sex, sexual orientation, national origin, religion, and disability as the only protected classes.

LGBTQ activists in the state are calling out the Republican lawmakers.

“What these Representatives are doing is cynical political theatrics at their worst,” said One Iowa Action Executive Director Courtney Reyes in a statement.

“Allowing transgender Iowans to be fired from their jobs or denied housing simply because they are transgender is a new low, and they should be ashamed of themselves,” she continued. “Instead of concentrating on jobs, infrastructure, or education they are using the transgender community as a wedge issue in what will be a failed attempt to win votes in the upcoming election.”

While Republicans in the Iowa house were focused on taking away all discrimination protections from transgender people, the state senate was focused on the transgender flag.

The flag flew above the state capitol for three to five minutes last November to observe the Transgender Day of Remembrance. One Republican said that it was part of a “rainbow jihad.”

Now they want to ban most flags from being flown at state buildings and public schools. The only flags the bill would allow would be official government flags like the Iowa or American flag and the POW/MIA flag.

“I think that was completely disrespectful to the brave men and women who served in the military,” said Iowa Sen. Jake Chapman (R), adding that “numerous constituents” were concerned about the transgender flag flying at the state capitol next to the POW/MIA flag.