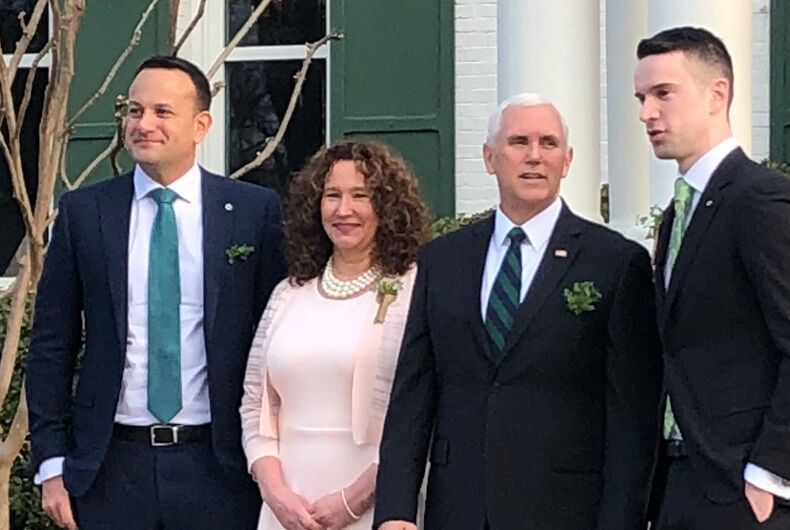 The former prime minister of Ireland, Leo Varadkar, is opening up about his coming out — and his infamous meeting with then-Vice President Mike Pence on his 2019 diplomatic visit to the United States.

Varadkar recalls his partner Matthew Barrett’s excitement to come along as to shove their relationship in the notoriously anti-LGBTQ politician’s face, and the “mixed reaction” his visit got in the public eye.

“Matt stays out of politics but that was one of the few things he really wanted to do,” Varadkar said of his partner, “But it had a mixed reaction you know.

“From some of the gay community in America it was, ‘Well done for confronting Vice President Pence with the reality of modern relationships.’ But then other Americans were very critical of us, saying we should boycott this person,” Varadkar said on the Irish docuseries All Walks of Life.

“But I actually do appreciate that we would never have achieved any sort of equality for people who are LGBT had it not been for some of the more radical elements,” he said.

Varadkar made the visit to America in March 2019, and in celebration of St. Patrick’s Day, had breakfast at the Naval Observatory, Pence’s residence as Vice President (Pence is of Irish descent).

Pence’s wife, Karen, who works at a school that bans LGBTQ people, just happened to be unavailable for the meal with the same-sex couple. Still, Varadkar made headlines for his remarks about being out while standing right next to the then-Vice President and his wife.

Varadkar, whose father was born in India and immigrated to Ireland, indirectly shaded the anti-LGBTQ politician by saying that his story is possible in “every country where freedom and liberty are cherished” because “we are, after all, all God’s children.”

“I lived in a country where if I’d tried to be myself at the time, it would have ended up breaking laws,” Varadkar said. “I stand here as the leader of my country. Flawed and human, but judged by my political actions, not by my sexual orientation, my skin tone, gender, or religious beliefs.”

The meeting between the gay couple and the Second Family of the United States came right after Pence’s staff attempted to use the meeting to prove that he was more LGBTQ-friendly than believed.

“I’ve sat at tables with people who would gladly deny me the right to marry, who openly support conversion therapy, and who adamantly believe being gay is a choice,” Chasten Buttigieg said of that.

“Doesn’t mean they’re any less homophobic because we shared a meal.”

Varadkar had come out in 2015 when he was the Ireland health minister, right before the country legalized marriage equality via a nationwide referendum in May, a month before America did via a judicial ruling in June.

He was the first out minister in the historically conservative and heavily Catholic nation. In 2017, Varadkar became the leader of his Fine Gael party, and then was elected to the Taoiseach, the country’s prime minister and head of government, separate from the President of Ireland as the head of state.

Varadkar became the Tánaiste, the deputy head of government, in June 2020 after his party lost the majority and the top parties in Ireland formed a coalition government.

In his All Walks of Life episode, Varadkar also reflected on how he grew up “in a very monocultural Ireland, very white, very Catholic.”

“I was the guy with the dark skin and the funny name, he said, “Even though I don’t think I was ever subjected to any kind of racial violence or anything like that, there is an ‘othering’ when you’re of colour.”

The now-42 year old admitted that already feeling othered made him hope he wasn’t actually gay. “I think I kind of hoped it would go away, just some sort of phase,” he said, “or, then kind of considered, maybe this is just a cross you bear, and you get a girlfriend or marry a woman and have a family and just suppress it.”