Is calling someone a “chicken” as bad as calling them a “faggot”? Is describing a lazy person as slothful the same as white supremacy? PETA seems to think so.

A new campaign decries “speciesism” and asks people to stop using animal names as an insult if they believe in “equality.”

Related: Meet the man who is PETA’s first-ever trans “Sexiest Vegan Next Door”

The People for the Ethical Treatment of Animals (PETA) is no stranger to controversy. The extremist animal rights group is well known for its outrageous and frequently offensive marketing.

The group likes to use hot button issues to tout veganism and decry animal testing, circuses, and other cruelties inflicted on our fur friends. But their gung-ho litmus tests often neglect to show compassion for humans.

“Words can create a more inclusive world, or perpetuate oppression,” the group tweeted with a chart showing alternate words to use. “Calling someone an animal as an insult reinforces the myth that humans are superior to other animals & justified in violating them. Stand up for justice by rejecting supremacist language.”

Perpetuating the idea that animals are sly, dirty, or heartless desensitizes the public and normalizes violence against other animals.

PETA urges everyone who believes in equality and justice to take a look at their personal beliefs and the language they use, and break free of this outdated mindset that denigrates other animals.

Always be kind and consider not using insults at all.

The offensive comparison did not go over well online with other users quickly pointing out how degrading it was.

“You just compared calling somebody a ‘chicken’ to slavery,” the rapper ZUBY replied. “Might be a good time to log off.”

“If you believe in equality and justice,” the group replied with a canned response sent to other critics, “it isn’t hard to see how calling someone an animal as an insult can further animal suffering. All the horror inflicted upon animals is rooted in the false idea that they are less than us and not deserving of respect.”

The group refused to acknowledge that unlike humans, who can understand the hateful slurs thrown at them, animals do not, in fact, speak a human language and do not understand human insults for each other.

This isn’t the first time the group has pulled a similar stunt. In 2018, they claimed that the phrase “bring home the bacon” is equivalent to “that’s so gay.” The results were similar.

You just compared calling somebody a ‘chicken’ to slavery.

If you believe in equality and justice, it isn’t hard to see how calling someone an animal as an insult can further animal suffering. All the horror inflicted upon animals is rooted in the false idea that they are less than us and not deserving of respect. #EndSpeciesism ❤️

Just as it became unacceptable to use racist, homophobic, or ableist language, phrases that trivialize cruelty to animals will vanish as more people begin to appreciate animals for who they are and start ‘bringing home the bagels’ instead of the bacon.

I’m sorry what? My cat will never be affected by me saying “cat got your tongue” in the same way I am affected by someone calling me the n-word, but go off I guess. 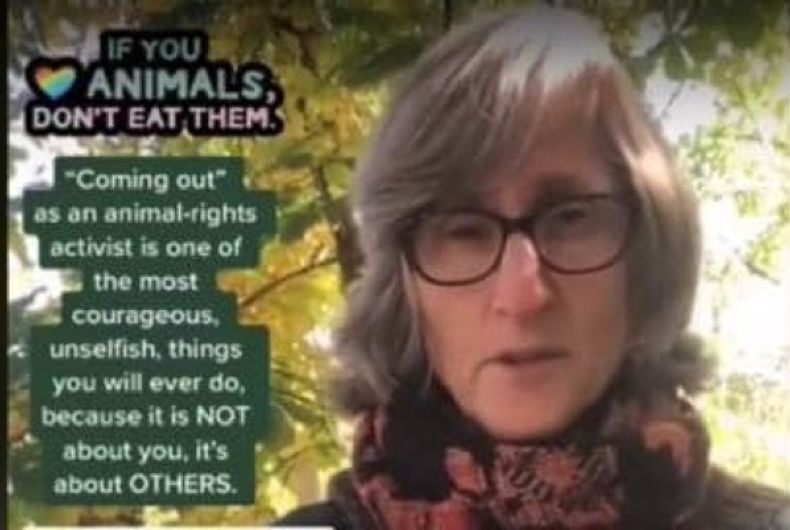 Is calling someone a “chicken” as bad as using an anti-LGBTQ slur? PETA says it is.