“The United States Holocaust Memorial Museum is deeply alarmed at the hateful rhetoric at a conference of white nationalists held on November 19 [2016] at the Ronald Reagan Building just blocks from the Museum…The Holocaust did not begin with killing; it began with words. The Museum calls on all American citizens, our religious and civic leaders, and the leadership of all branches of the government to confront racist thinking and divisive hateful speech…”

These words from the United States Holocaust Memorial Museum in Washington, D.C., refer to a white nationalist conference headlined by neo-Nazi Richard Spencer, who greeted attendees with a tribute to President-elect Donald J. Trump shouting “Hail Trump! Hail victory!” from the stage before all in attendance gestured in a traditional Nazi straight-arm salute.

Donald Trump, who once identified himself as a Democrat and recently disavowed himself from white nationalists, has transformed himself at the very least into the mouthpiece of the far-right-wing of the Republican Party.

In political terms, a “strongman” is one who leads by force within an overarching authoritarian, totalitarian, dictatorial regime. Sometimes the formal head of state, sometimes another political or military leader, the strongman exerts influence and control over the government more than traditional laws or constitutional mandates sanction.

Strongmen situate themselves within positions along the political spectrum, usually toward the extremes on the right and the left. In an extensive Wikipedia list of strongmen by country, Benito Mussolini is included among the four from Italy, Adolph Hitler among the seven from Germany, and only one, Donald Trump, appears on the list from the United States.

They find themselves in the company of, for example, Juan Perón of Argentina, Pol Pot of Cambodia, Fidel Castro of Cuba, Francois Duvalier of Haiti, Saddam Hussein of Iraq, Manuel Noriega of Panama, Vladimir Putin of Russia, and Idi Amin Dada of Uganda.

On the right-wing side of the dictatorial strongmen’s political spectrum, we find the philosophy and practice of “fascism.” While also deployed as an epithet by some, fascism developed as a form of radical authoritarian nationalism in early-20th century Europe in response to liberalism and Marxism on the left.

1. Powerful and continuing nationalism,
2. Disdain for the recognition of human rights,
3. Identification of enemies/scapegoats [of the country’s problems] as a unifying cause, 4. Rampant sexism,
5. Supremacy of the military,
6. Controlled mass media,
7. Obsession with national security,
8. Religion and government are intertwined,
9. Corporate power is protected,
10. Labor power is suppressed,
11. Disdain for intellectuals and the arts,
12. Obsession with crime and punishment,
13. Rampant cronyism and corruption, and
14. Fraudulent elections

While many governmental leaders and candidates for public office may push for a number of these tactics while still remaining outside the definition of “fascist,” the cumulative effect increases depending on the severity of and the degree to which they initiate these measures.

Though we do not yet know how Donald Trump will act and react once installed in the White House (or more likely in Trump Tower at taxpayer expense), and although he has begun to moderate somewhat on his rhetoric and policy initiatives proposed during his 15-month campaign, what he has stated previously falls directly within the parameters of fascism. Using Britt’s taxonomy, I filled in Trump’s positions:

1. Appeals to “nationalism,” presented in the guise of “popularism,” feeding on people’s fears and prejudices, which has already resulted in the segregation of people and nations from one another, and threats and dangers of violence;

2. Promises to roll back many of the rights and protections minoritized peoples have tirelessly fought for over the past decades: reproductive rights, voting rights, citizenship rights, anti-torture guarantees, rights of freedom from unreasonable search and seizure, rights of assembly, disability rights, freedom of religion, possibly marriage equality. Recall, as well, his father Fred Trump and his refusal some years ago to rent their properties to black people, over which they were sued and eventually signed a consent decree;

3. Scapegoating of already disenfranchised identity categories as the internal and external enemies of the United States: Muslims and anyone from Muslim-majority countries, Mexicans and all Latinx people, urban “thugs,” the press, Somalis, President Barack Obama, the ACLU, liberals, etc.;

5. Promises to enlarge and improve our “failing” military and fire generals who Trump believes know less about ISIS than he does;

6. Threatens to employ libel laws to sue the “crooked and lying” media (Lügenpresse, “lying press” popularized by the German Nazis to silence opposition);

7. Continual cries against “Islamic jihadist terrorists” as the number one threat to our nation thereby exposing U.S. Muslims to increased calls for a “national registry” and surveillance to track their movements;

9. Promises of a deregulated corporate business sector with massive tax cuts and other financial incentives. “I will formulate a rule which says that for every one new regulation, two old regulations must be eliminated;”

10. Implied reduction in the rights of workers to organize and negotiate collective bargaining agreements, privatization of entitlements, advocacy for the abolition of a national minimum wage (while relenting somewhat to a $10 minimum wage for the present time at least);

11. Resentment and attacks on the political, media, and intellectual “elites” to the point of instigating scorn and harassment at the “elite media” covering Trump’s rallies and demanding an apology from the cast of the Broadway show, “Hamilton: An American Musical” for voicing concerns over a Trump presidency with VP-elect Mike Pence in attendance;

12. Near obsessive calls for “law and order” involving draconian (and possibly unconstitutional) measures of torture and surveillance;

13. Increasing deployment of his adult children and son-in-law as close trusted political operatives, who even meet with visiting diplomats and have been sent to foreign capitals to negotiate political and business deals, plus continuously unresolved conflict-of-interest issues between his position as President and his worldwide business interests;

14. Assisted by the larger Republican Party and the Supreme Court, gutting of the 1965 Voting Rights law, which has resulted in voter suppression campaigns effectively reducing the number of polling stations in primarily minoritized racial communities, and limiting days and times for pre-election-day voting.

Donald J. Trump currently is involved with his transition team in advance of taking the oath of the office of President of the United States of American on January 20, 2017, and time will tell whether his actions and politics follow his campaign behavior and rhetoric.

But referring back to the United States Holocaust Memorial Museum’s history reminder: “The Holocaust did not begin with killing; it began with words.” 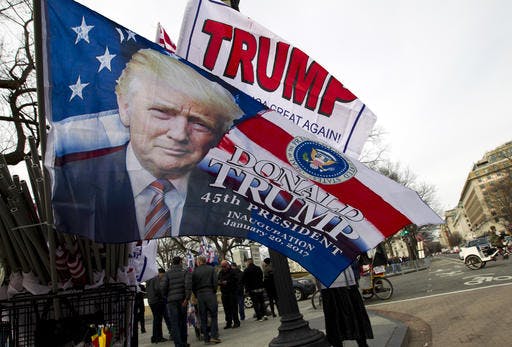 We condemn in the strongest possible terms this egregious display of hatred, bigotry, and violence, on many sides. In his terse and insufficient verbal response… 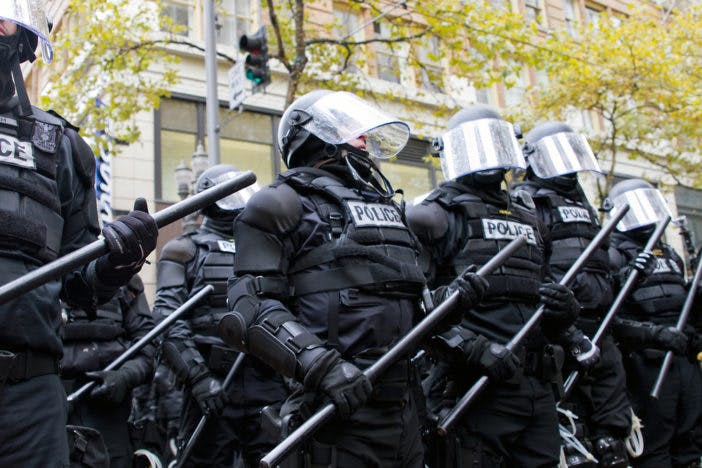 Police in riot gear hold the line in Downtown Portland, Oregon during an Occupy Portland protest on the first anniversary of Occupy Wall Street November…

Cancel reply
Is Donald Trump a fascist? Consider these 14 signs.