There’s no great mystery about the motives behind this deliberate misnaming. ‘Democrat Party’ is a slur, or intended to be—a handy way to express contempt. Aesthetic judgments are subjective, of course, but ‘Democrat Party’ is jarring verging on ugly. It fairly screams ‘rat’.”

Hendrik Hertzberg in The New Yorker

A major tenet of liberation is the freedom to define oneself!

Republicans using “Democrat Party” as an epithet goes back decades. For example, The New York Times wrote on August 17, 1984, “The term ‘Democrat Party’ has been used in recent years by some right-wing Republicans on the ground that the term used by Democrats implies that they are the only true adherents of democracy.”

On the other hand, Democrats virtually never argue that “Republican” in the Republican Party implies that they are the only true adherents of a republican form of government.

In this regard, the infinitive form of the verb “to colonize” can be described as the process of appropriating a place or domain to establish political and economic control. During the practice, the dominant nation or group attempts to colonize not only other peoples’ domains (territorial colonization or imperialism), but also their minds, their customs, their language, in fact, their very way of life.

In countries with a historical legacy of colonization, and even in those without this history, members of dominant groups have accumulated unearned privileges not accorded to others. Though the official terms “colonization,” “colonizer,” and “colonized” may have changed somewhat, nowhere in the world have we experienced a truly post-colonial society. The colonization remains, though at times possibly in less visible forms.

Humans in general are one of those rare animal species with the capacity to understand and transmit language with precision and detail. Language is among the many ways we communicate with one another and convey ideas, thoughts, and emotions of all kinds. Through language, people come to understand their culture, begin to develop a sense of who they are, and come to know what is expected of them in terms of their social and cultural roles.

While an acorn will inevitably become an oak tree, humans require language and culture to realize their full potential. Charles Horton Cooley talks about the “looking glass self,” whereby other people are the mirrors through which we see ourselves.

We cannot underestimate the power of language in determining how we make sense of the world and of ourselves. I am a Democrat (well, actually a Democratic Socialist), and one who believes in democracy as a member of the Democratic Party.

For Republicans to misname the Party as a slur is akin to Vladimir Putin referring to our country as the “Disunited States of America,” a psychiatrist defining me as “heterosexual,” or a conservative Christian announcing that Jesus died for my sins.

On every occasion when Republicans misname our Party, we must set the clear and immovable boundary that we will not allow their attempts to colonize and coopt, for to permit them to continue is to surrender our agency, subjectivity, and sense of collective self.

Until the Republicans call it the “Democratic Party” rather than the “Democrat Party,” I wonder how they might respond if we all referred to their political affiliation as the “Republic Party.” 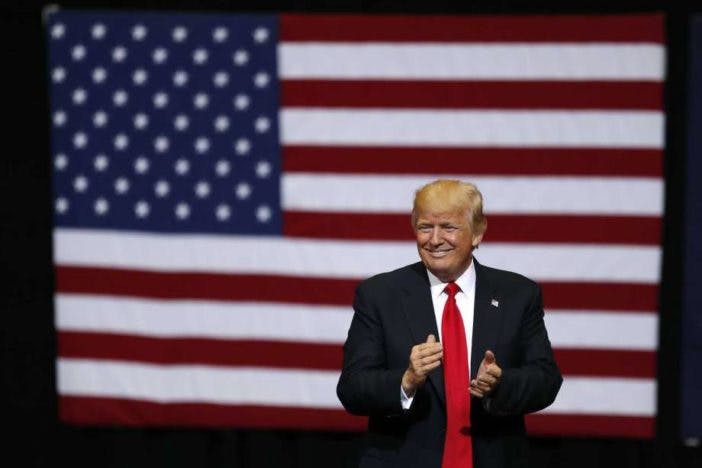 President Donald Trump smiles at supporters as he arrives to speak at a rally, Wednesday, June 21, 2017, in Cedar Rapids, Iowa.Photo: Charlie Neibergall, AP…