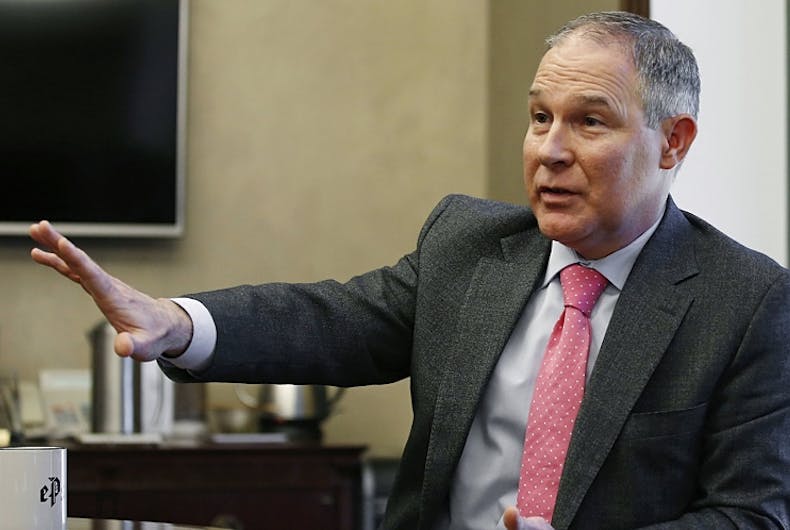 There’s a long list of homophobes to choose from in the Trump administration. There’s Attorney General Jeff Sessions, who never met a gay person he didn’t want to punish. There’s Housing and Urban Development Secretary Ben Carson, who thinks gay people have a lot in common with pedophiles. Add in Betsy DeVos, Ryan Zinke and Rick Perry, and you have an embarrassment of  anti-LGBT riches. Or at least an embarrassment.

Not to be left out is Environmental Protection Agency chief Scott Pruitt. As the former Attorney General of Oklahoma, Pruitt worked hard to burnish his anti-gay creds, opposing marriage equality and the rights of transgender students. At the EPA, Pruitt, who gives every appearance of being in the pocket of industry, has spent his time denying the existence of climate change.

But a newly revealed radio interview that Pruitt gave back in 2005 shows that homophobia has never been far from his sights. Moreover, the tape shows that climate denial and anti-LGBT sentiment are part of the same far-right Christian philosophy.

In the interview surfaced by Politico, Pruitt complained that “minority religions” were elbowing Christianity out of “the public square” and that evolution was a theory “more from a philosophical standpoint than a scientific standpoint.” He also says he believes that his “inalienable” right to own a gun comes directly from God.

But in the interview, Pruitt also endorses the idea of a Constitutional convention, which would allow states to put forth their own amendments. Under this idea, much loved by conservatives, if two-thirds of state legislatures approve of an amendment, it becomes part of the Constitution.

The conventions are necessary, in their view, because of court rulings like those allowing marriage equality.

“I think the most grievous threat that we have today is this imperialistic judiciary, this judicial monarchy that has it wrong on what the First Amendment’s about and has an objective to create religious sterility in the public square, which is wholly inconsistent with the Founding Fathers’ view,” Pruitt warned.

If the rights of religious conservatives like him aren’t protected, Pruitt said darkly,  “it leads to anarchy, it leads to rebellion,” something he said would happen in the coming decades.

None of Pruitt’s comments are surprising, since he used to be a Baptist deacon and a trustee of the Southern Baptist Theological Seminary. And Pruitt has never exactly hidden his views. He posted links to the interviews on his campaign website when he ran for Attorney General. The EPA didn’t respond to Politico‘s request to find if Pruitt has changed his beliefs. Which is pretty much proof he hasn’t.

But the tapes are another indication that Trump, despite his professed love for the LGBT community, has outsourced the work of governing to a band of homophobes. The only question is which one is the worst. Pruitt is certainly working hard to win that title.

Cancel reply
Is Scott Pruitt the most homophobic member of Trump’s cabinet full of deplorables?