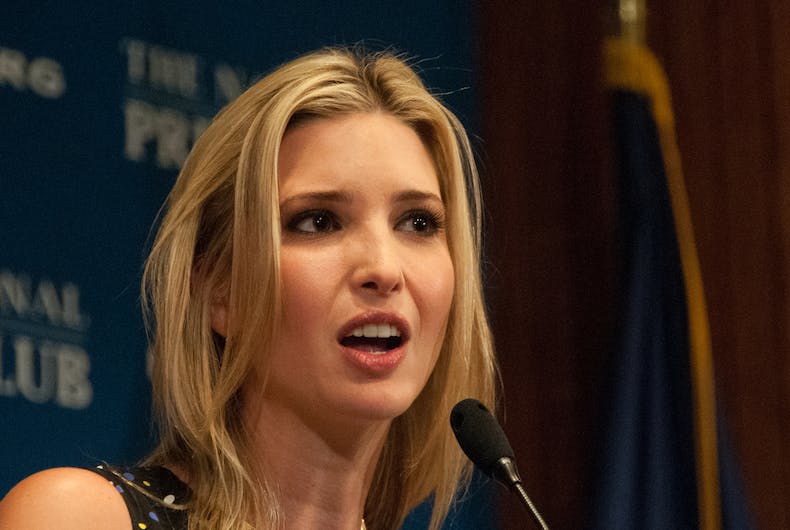 Remember when Ivanka Trump was going to be the firewall between us and the crazies in her dad’s administration?

If you haven’t figure it out by now, that’s never going to happen. Now we have Ivanka’s own word for it.

In a profile in the Washington Post, Ivanka acknowledges that she doesn’t see her role as advocating publicly against policies she disagrees with.

“When people say, ‘Where is Ivanka and why is she silent on X, Y, Z?,’ they don’t understand how any White House works,” Ivanka told the paper.

In Ivanka’s opinion, her duty is to get behind the White House, no matter what. “No West Wing staffer should tweet things that are inconsistent with the policy of the White House,” she said.

There are two big problems with that theory. The first is that her father often tweets things that are not only at odds with existing policy but also reality.

The other is that Ivanka herself has taken to tweeting about LGBT celebrations at a time when the White House is doing its best to erase them.

The profile portrays Ivanka as seriously out of touch with political reality. The article relies on friends to say that Ivanka was essentially a delicate hothouse flower not prepared for the political equivalent of Survivor.

She has complained to friends about being “weaponized” by other political appointees who want to use her influence to sway her father. Despite being the daughter of one of the dirtiest political fighers in modern times, Ivanka seems to believe that her high-mindedness should have exempted her from criticism.

The profile seems like a concerted effort to bolster Ivanka’s and husband Jared Kushner’s political fortunes. Kushner had his security clearance downgraded last month, and reports have circulated that the president himself would like to see the couple exit from the White House altogether. Both have reportedly had business deals subject to inquiry by the FBI or Special Prosecutor Robert Mueller.

Despite the profile’s rash of testimonials from administration officials praising Ivanka (and sucking up to her father), the article is not likely to do much to restore her power.

The same day the Washington Post article appeared, McClatchy news service reported that Ivanka never cut her ties to the Trump Organization, making $1.5 million from the business last year. That leaves her open not just to charges that she’s profiting from her White House position but that foreign powers use her business ties to curry favor with the administration.

Of course, then she’s have something else in common with her husband. That’s one of the questions about Kushner that the Mueller team is looking into.