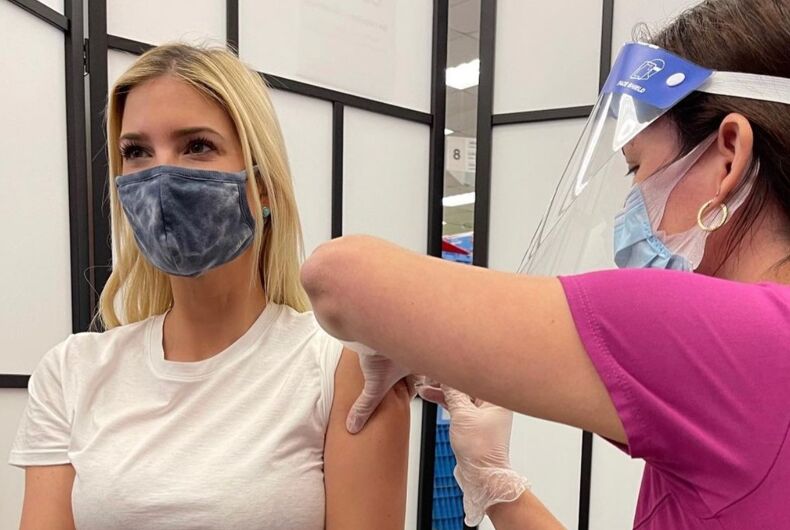 Ivanka Trump can’t even get the COVID vaccine without facing harsh criticism online.

Yesterday, Donald Trump’s daughter and former White House aide posted a picture of herself getting the vaccine to Instagram with an innocuous message.

“Today, I got the shot!!! I hope that you do too! Thank you Nurse Torres!!!” she wrote, adding a heart emoji.

Then the negative comments started rolling in.

Ivanka no. Just no.

Nope not putting that in my body.

Bummer. I was hoping you were above this kind of virtue signaling.

No thank you! I have immune system for a reason.

No thanks! With a 99% survival rate, I shall pass. With Bill Gates involved I will not get one.

Hell no. Quit telling perfectly healthy people to take this so called “vaccine.”

Because of the 99.8% survival rate of a virus they’ve never identified? Anthony Fauci and Andrew Cuomo would be proud.

Nope and please stop trying to manipulate us into doing so. It’s surprising to see you doing this now like the left and Hollywood have been.

I’ll keep you in my prayers.

Ugh. A vaccine for a HOAX?

Bill Gates is tracking you now.

Nope. I don’t trust you people. Never had flu shots and NEVER I will give my body to experiment on me… No No No.

I don’t expect Trumps family to push this propaganda, but I also expected him to implement Martial Law rather than ditching us with the evil democrats and that didn’t happen.

You were suppose to be part of the resistance.

Wow this is awful, guess we know who you really work for and it’s not the goody guys.

Laaaaaaame, guess she’s down with the eugenics culling then…

Please don’t peer pressure. Do you ask people if they got their pap smear or how much they weigh or if they have high cholesterol? When did it become OK to ask people private info or coerce medical decisions?

Losing faith in you and your Father…disappointed.

Wow. I didn’t believe that you were that stupid? I really feel sorry for you and hope you don’t die, like thousand of other have.

The comments repeated a few false statements about the pandemic and the vaccine. The pandemic has killed over half a million Americans. The vaccines have not killed “thousands” of people and have been thoroughly tested; in fact, regulators are so cautious that the rollout of the Johnson & Johnson vaccine has been slowed due to the mere possibility that six people may have died after getting that vaccine out of the nearly seven million people who got it.

And Bill Gates is not microchipping people with the vaccine. He told reporters that the conspiracy theory is “almost hard to deny… because it’s so stupid.”

The incident shows how hard it is for Republicans to maintain mainstream appeal while speaking to the concerns of their more extreme base.

Ivanka Trump has been trying to rebuild her image after four years in the Trump White House, but her political ambitions could be thwarted if she can’t speak to the Trump base like her father did.

She would have a hard time on the left, especially considering her lack of support from LGBTQ people.

Trump was on the receiving end of massive criticism in June 2020 when she tweeted “Less hate, more love!” in a Pride message after working for the Trump administration for over three years at that point, which had been steam-rolling over LGBTQ protections and rights. She was even caught donating $50,000 to a church that says homosexuality is an “individual choice.”