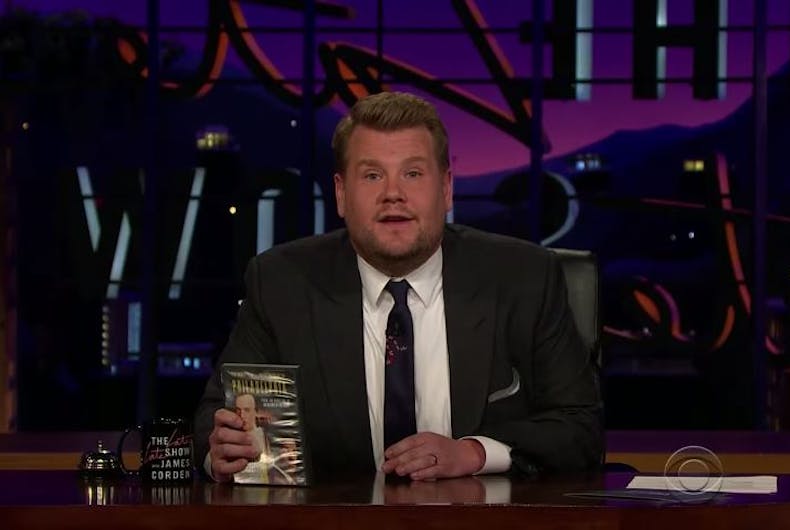 James Cordon and his crew sent almost 300 copies of the movie ‘Philadelphia’ to Mar-a-Lago in hopes of getting Trump to care about HIV/AIDS.Photo: YouTube/The Late Late Show with James Cordon

It is becoming increasingly obvious that President Donald Trump doesn’t care about people living with HIV/AIDS.

That’s the conclusion six members of the Presidential Advisory Council on HIV/AIDS (PACHA) came to, leading them to resign.

They cited his attempt to take away access to healthcare from those living with HIV/AIDS with his goal of repealing Obamacare, as well as his refusal to meet with advocates during the campaign, his failure to appoint someone to head the White House Office of National AIDS Policy.

If you go to the official Office of National AIDS Policy webpage on WhiteHouse.gov it remains blank.

Trump’s proposed budget asks Congress to cut $300 million from HIV/AIDS funding, a move that has drawn criticism from across the political spectrum, including from former president George W. Bush.

“I looked up some stats, which is shocking, really. More than 1.1 million people in the U.S. live with HIV/AIDS, and of those nearly 60 percent are unable to access lifesaving medications. And that’s not to mention the 36.7 million people worldwide who live with HIV, of whom nearly 2 million are children under the age of 15.”

Cordon said that most people may not know those statistics, because of the stigma surrounding HIV/AIDS. Many people don’t want to talk about it, he said, making it easier to continue to ignore.

He said when he grew up, the topic was so taboo that he ended up learning about it mostly through the movie Philadelphia, starring Tom Hanks.

“As I learned more, I started to care about it,” said Cordon. “So today I started thinking, maybe that’s the problem here. Maybe Donald Trump doesn’t care because he’s never seen Philadelphia. In fact, I’m almost certain that’s what it is.”

So they tried to send a copy of the movie to the White House. According to Cordon, the White House was less than thrilled with his calling up, even if he was coming gift in hand.

But since Trump spends so much time golfing at Mar-a-Lago, it only made sense, Cordon and his team decided, to send as many copies of the movie as they could get their hands on to his Florida address instead.

Cordon said they hope that Trump realizes two things: Hanks deserved that Oscar, and that HIV/AIDS cannot be ignored.

Even if Trump isn’t listening, we are glad Cordon set aside time in his show to continue the dialogue on the need for better access to treatment for those living with HIV/AIDS.