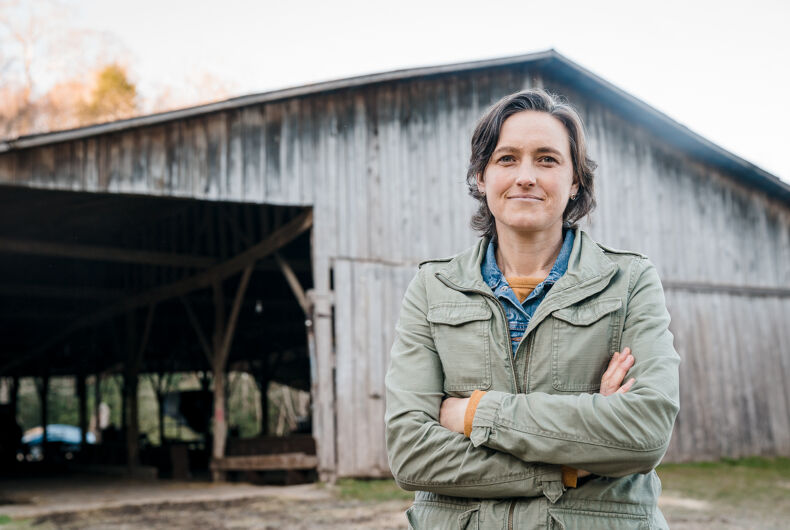 Her candidacy presents a stark alternative to the district’s current deeply conservative and scandal-ridden representative, Madison Cawthorn, known as one of the politicians who fired up the crowd before the violent insurrection at the Capitol on January 6th.

“He helped incite a violent insurrection. He has called for the overturning of election results, and he’s stoking the flames of a lot of division, and what I hear people [in my district] saying is that’s not who we are. It’s not the community we want to be creating, it’s not the future we want to be building together.”

This last year has been hard on the people of Western North Carolina. And that’s why I just can’t understand why my opponent Madison Cawthorn would vote against real and meaningful relief for them. If you’re not going to Washington to help, then why go?

Beach-Ferrara rejects the idea that a gay Democratic woman can’t be elected in the South. In fact, she said, she has already been elected to the Buncombe County Commission—twice.

“Our district gets written off a lot as a district that’s just too tough for a Democrat to win in,” she said, “and I don’t believe that. I don’t accept it.”

In addition to her role as commissioner, Beach-Ferrara is also a Christian minister, mother of three, and the founder and Executive Director of the Campaign for Southern Equality, which fights for LGBTQ rights across the South. She has a long history of LGBTQ advocacy and played a large role in the fight for marriage equality. She also served on the Biden Foundation’s Advisory Council for Advancing LGBTQ Equality.

From the start, Beach-Ferrara has been upfront about her sexuality. It is one of the first things she mentions in her campaign video, as well as in the Tweet announcing her decision to run.

I’m Democrat Jasmine Beach-Ferrara and I’m running against Madison Cawthorn. As a gay woman, Christian minister, mom of 3, I’ve heard “you can’t” all my life. I’m ready to prove the skeptics wrong again. Please retweet and ask everyone you know to follow this account to join us. pic.twitter.com/dJroXf3bWf

“I think part of being an LGBTQ person who is…really proud to be a Southerner is about how we navigate who we are in our public lives,” she said, “and there has historically been so much pressure for folks to stay closeted or opaque, and my faith teaches me to show you as I am and to try to meet people as they are…What we’re trying to do is create a campaign where everyone is welcome at the table and everyone can see themselves as a leader in our community.”

Her organizing work, she said, has given her a steadfast belief in her ability to win. When the Campaign for Southern Equality was fighting for marriage equality, she said many people told them it wouldn’t happen for decades. They refused to believe that and kept fighting.

“That approach is the same approach I have taken in my first two campaigns, and that we’ll be taking here, which is that we organize everywhere, we talk to everyone who is willing to talk, we build big tables, we listen closely to what folks are saying, to what matters to them and what they need, and we build a politic and a campaign that’s about hope and a sense of shared purpose and a deep sense of wanting to serve our communities.”

In Congress, Beach-Ferrara, hopes to continue working on the issues in her community that she has already been focusing on as commissioner, like the opioid crisis, access to mental health services, expanding early childhood education, and job creation.

“The people of Western North Carolina deserve the strongest possible leadership in DC,” she said, “and need someone in Congress who is going to show up every day to respond to urgent needs in our community and to push for policies that will help people survive this very challenging time and ultimately thrive.”

In the first 24 hours after announcing her campaign, Beach-Ferrara raised $100,000. As of today, her campaign video has over a million views. In the video, she also spoke about the need to build “a really big bridge” between people divided so strongly by politics.

Building this bridge, she explained, requires empathy, along with a “relentless sense of hope about what’s possible.”

Her experience fighting for LGBTQ rights, she said, taught her to talk to anybody who is willing to engage with her, to organize everywhere, and to just keep showing up.

“The reason I believe hard things are possible,” she said, “is because I have seen it happen so many times.” 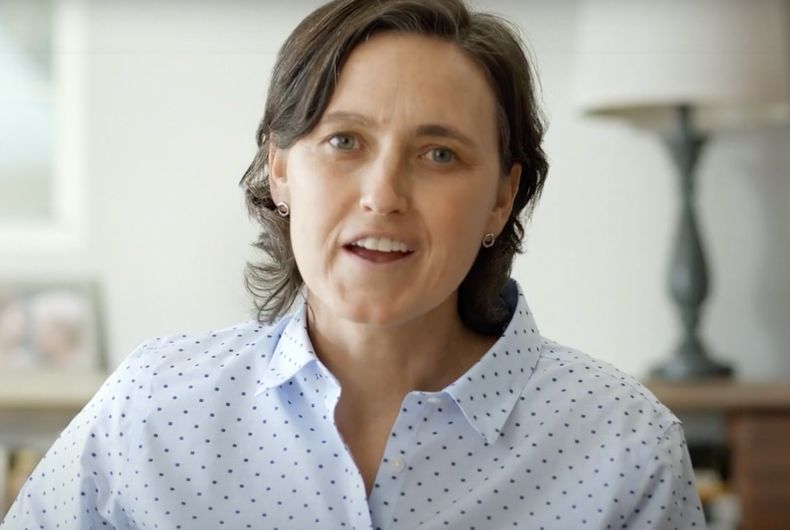 Jasmine Beach-Ferrara is a gay Democrat running in North Carolina. Here’s how she says she can win.