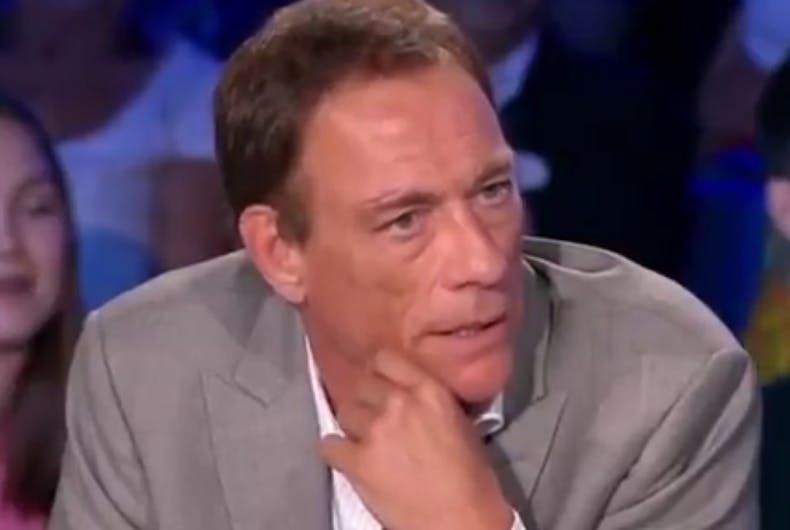 Action film star Jean-Claude Van Damme has come under fire for anti-gay comments he made over the weekend, including comparing marriage equality to dogs marrying.

He appeared on the French late-night show On n’est pas couché this past Saturday along with French Minister of Gender Equality Marlène Schiappa. He was asked about sexist comments he has made in the past, and his response caused Schiappa to ask him about same-sex couples.

Van Damme said that he was brought up with “traditional” values. “I believe that a man is responsible, if he marries, to feed his family,” he said.

Schiappa pushed him on this, asking about same-sex couples. “According to your theory, if a man marries a man, or a woman marries a woman, how do they organize themselves?” she said.

“Two men can marry, you know,” Schiappa responded. Marriage equality has been legal in Belgium, Van Damme’s home country, since 2003 and in France since 2013.

“They’re going to marry each other,” he said.

“Men marry each other,” he said again, pretending to be shocked.

Some people laughed, but Schiappa interrupted to say that she couldn’t laugh. “It’s the day of Pride today, the Pride Parade where people march to defend their rights,” she said, referring to Paris Pride.

“The last time someone made a comparison between homosexuality and bestiality was a politician from the National Front [a far-right French political party] and he was convicted [of hate speech] by the state.”

Van Damme responded: “I have a lot of gay friends. If they want to get married, it’s OK.”

Van Damme has been married five times and has three children with two women.