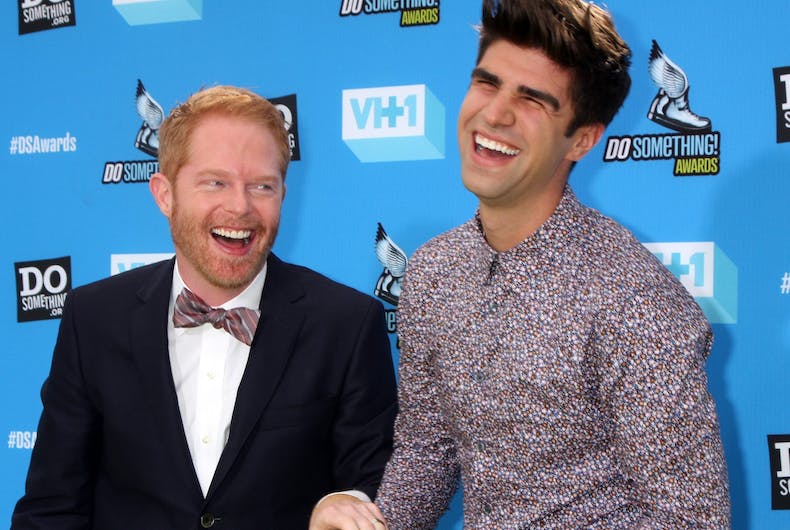 Jesse Tyler Ferguson, Justin Mikita arrives at the 2013 Do Something Awards at the Avalon on July 31, 2013 in Los Angeles, CAPhoto: Shutterstock

On last night’s episode of The Late Late Show with James Corden, 44-year-old out gay actor Jesse Tyler Ferguson announced that he and his 34-year-old husband, Justin Mikita, are expecting a baby in July.

Ferguson made the announcement during a discussion of the upcoming 40th birthday of fellow guest and actor Charlie Hunnam. Hunnam said he feels his 40s represent a chance to manifest as a self-actualized adult.

Ferguson agreed. “Like you said, it’s when you finally become an adult, I feel, like, ‘I need to start getting serious about things.’”

He then added, “This is something I haven’t mentioned to anyone, if we could just keep it between the three of us and you all (pointing to the audience), but I’m actually expecting a baby in July with my husband.”

The crowd cheered at the announcement.

“Oh my god!” Corden exclaimed. “Do you know what you’re having: a boy or a girl?”

After Corden congratulated Ferguson, Ferguson turned to Hunnam, lightly touched him on the shoulder, and said, “So no pressure, but like in the next four years you should really start to think about that.”

Later in the discussion, Corden mentioned that Ferguson has only three episodes left to film in his long-running ensemble sitcom Modern Family. In the series, Corden plays a gay married parent.

“It’s incredibly sad,” Ferguson said. “It’s like something I’ve been doing for 11 years. It’s basically like first through 11th grade when I was a kid. Seems like a lifetime now. It’s flown by.”

Mentioning the show’s “fantastic writing” and its convenient shooting schedule, Ferguson added, “We’ll never have a job this good.”

Corden advised Ferguson to allay his sadness over the show’s end by realizing that when he leaves Modern Family, he’ll soon be starting his own modern family in real life.

Here is the video of their discussion: