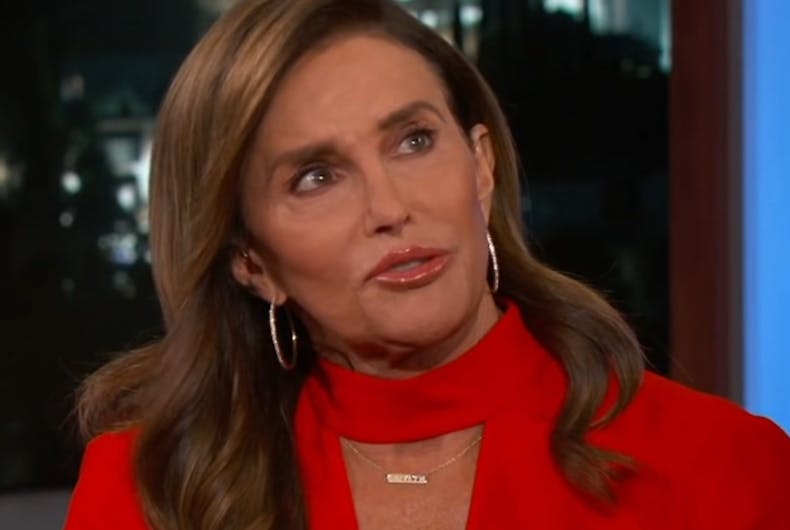 Caitlyn Jenner was on Jimmy Kimmel Live! this week and talked about her transition, her love of Aerosmith, and her continued support for Donald Trump.

In one segment, Jenner took Jimmy Kimmel to task for anti-trans jokes that he made about her. She mentioned this while talking about how the media’s coverage of her pushed her to come out as a trans woman to her kids.

She looked right at Kimmel and said, “In fact, guys like you… making… some jokes…” as a way to nudge him into talking about it.

He responded, “We didn’t know what was happening, we thought you were just vain,” as if making fun of a cisgender person’s gender expression is fine.

After that, he said, “Sorry about that, by the way.” Jenner said she accepted his apology. She added that Kimmel has “always been [her] favorite,” comparing him positively to late-night show host Jimmy Fallon.

In another segment, she talked about how she only found out that she already knew some transgender people after she came out as transgender, and how Aerosmith’s “Dude Looks Like a Lady” was her anthem.

In the last segment, they talk about politics. Jenner said that she does not regret voting for Donald Trump and cited his appointment of Neil Gorsuch to the Supreme Court as a positive thing that Trump has done. She said that she is a Republican mainly because of taxes, and tried to say that the US is the most taxed country in the world before Kimmel told her that was “not true,” and then she switched to say that the US has the highest corporate taxes, which is also not true.*

But her honesty that voting Republican is about personal enrichment at the expense of the well-being of most Americans, as it is for many wealthy people, is appreciated.

*The US has a high top marginal tax rate for corporations, which conservatives use to argue that American corporations pay more in taxes than corporations in other countries, which is not the same thing at all.

So even though the US has a high top marginal tax rate of 35%, the average corporation paid 12.1% of its income in taxes in 2011, for example.