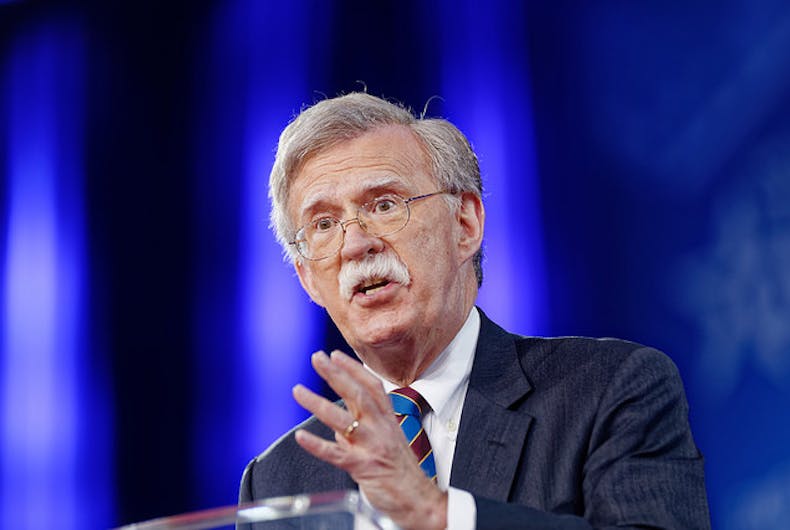 A huge misunderstanding has apparently led to another Trump Administration shake-up.

When John Bolton was first invited to be President Trump’s National Security Advisor (NSA), he was initially thrilled, say administration sources. “I love NSA sex,” he explained, “and who knows more about sex with No Strings Attached than Donald Trump?”

He was especially intrigued when the White House informed him that he would be specializing in foreign affairs. “Foreign affairs are great. They’re a lot less likely to sue you afterwards, “ he reportedly told a friend.

“Plus nobody wants me in the US,” he added. “Unless you count Lindsey Graham.”

Things started out awkwardly at the very first meeting with the President and his team.

“I was asked to defend my preferred positions,” noted a still-befuddled Bolton. “Apparently my eloquent rhapsody into the benefits of doggy-style was not appreciated by anyone “

“Other than Mike Pence,” he quickly corrected. “He asked to see my briefs, which led to an entirely different misunderstanding.”

It was only after a few months in the job that Bolton learned that the NSA position he had accepted was actually as the President’s National Security Advisor. “What the hell do I know about security,” he’s reported to have complained. “I just wanna bomb people!”

Asked about disagreements with the President, Bolton conceded that the two frequently had difficulty reaching accord. “We had different tastes in murderous dictators,” he noted.  “Trump kept all the best sociopaths for himself.”

Still he said, he has no regrets. “I’ve always wanted to fuck people all over the world. With President Trump I finally got to do it.”

This piece is satire. Normally that would be obvious, but during the Trump presidency, anything is possible.