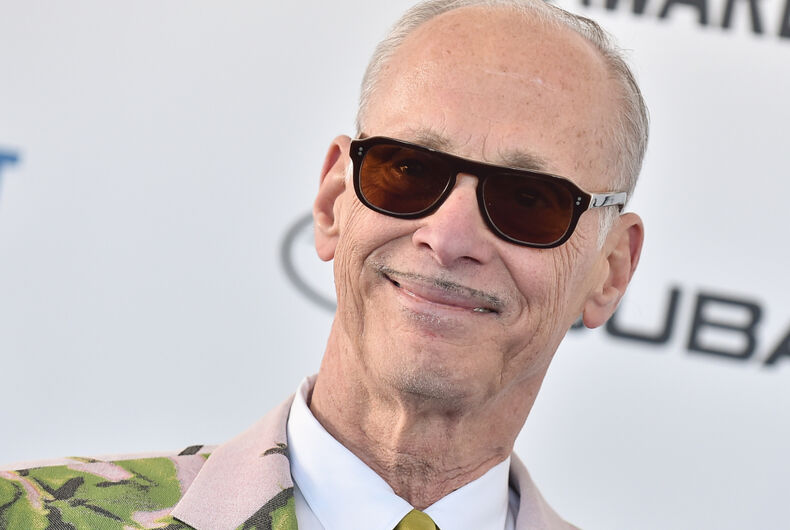 Now another out performer has joined the cast of The Marvelous Mrs. Maisel, the award-winning series from Amazon Studios that’s currently filming in New York City.

Writer and filmmaker John Waters has a guest-starring role in season 4 of the comedy-drama but said details about his character are being kept “under wraps.”

Set in the late 1950s and early 1960s, The Marvelous Mrs. Maisel stars Rachel Brosnahan as Miriam “Midge” Maisel, a New York housewife who pursues a career in stand-up comedy after she learns that her husband cheated on her.

Over the first three seasons, the series has won 20 Emmy awards and three Golden Globe awards, including Best Comedy Series from both awards shows. It was created by Amy Sherman-Palladino, who also created Gilmore Girls and Bunheads.

Part of the fun is that the main characters are fictional, but they interact with actual figures from the past, such as Jackie “Moms” Mabley and Lenny Bruce, and they appear in real places such as Greenwich Village, Chinatown, and the Apollo Theater.

Even the fictional characters seem to have traits in common with well-known personalities, such as Joan Rivers, Phyllis Diller, and Johnny Mathis. Period sets and costumes add to the illusion of going back in time, prompting writer Ryan Greene to call the show “a love letter to 1950s New York.”

Though perhaps known best for his books and movies, Waters, 74, has plenty of experience with stand-up comedy, performing dozens of spoken-word shows every year before the COVID-19 pandemic. He’s associated with the 1950s and 1960s after directing movies from that era, including Hairspray and Cry-Baby. He’s guest-starred on series such as Homicide: Life on the Street; Feud: Bette and Joan; The Blacklist and Law & Order: Special Victims Unit.

Production for season 4 was supposed to begin by mid-2020 but was derailed by the pandemic and finally began in January. A premiere date has not been announced, but there’s speculation it will be in December. Other stars include Alex Borstein, Tony Shalhoub, Marin Hinkle, Michael Zegen, Kevin Pollak, Caroline Aaron, and Luke Kirby as Lenny Bruce.

On social media, John Waters fans have been full of praise about the casting choice, with reactions such as “it’s so perfect” and “he is going to fit right in.”

Waters said in an email message that he’s not allowed to reveal anything about the script or his part. He’s due to film in New York this week.

“One episode, but you never know?”

John Waters lands a role in The Marvelous Mrs. Maisel