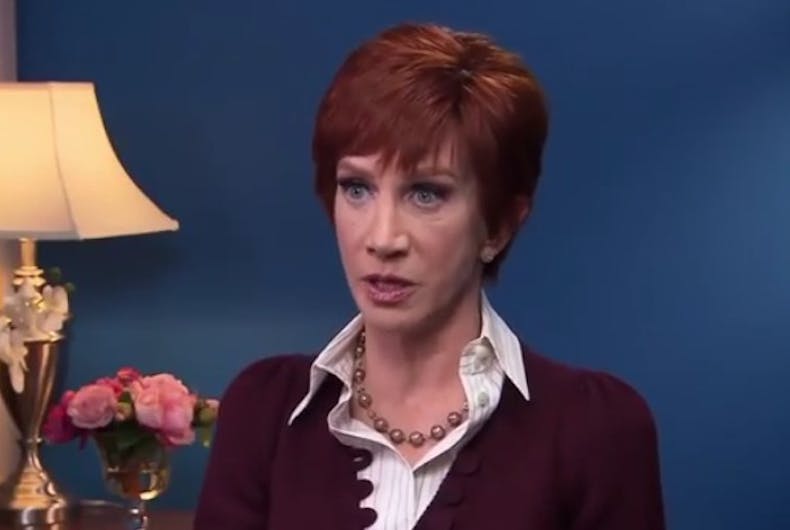 Comedian Kathy Griffin was recently asked by Entertainment Tonight what she would say to Donald Trump if she ever met him.

“If Trump was in front of you and you could say one thing to him, what would it be?” the ET reporter asked.

Last year, Griffin was viciously attacked by the right after a video emerged of her holding Trump’s severed head at a photo shoot. Griffin apologized, but she still lost her job with CNN, an ad campaign with Squatty Potty, and said that she was targeted by the Trumps in an attempt to “ruin [her] life forever.”

She talked with Instinct magazine about the ensuing two-month investigation by the Department of Justice.

There was probably a ten-minute section where I describe the actual interrogation by the feds, and you can hear a fucking pin drop. Hopefully I have waves and little jokes in there to make it funny, but I feel it’s Important to tell the story because what happened to me is historic, and never in the history of the United States, ever, has a sitting president used the power of unfortunately his Twitter, which has now become the most powerful television programming apparatus in history. Every time the guy tweets, it’s all over cable news, and sometimes they even break into network news. So, obviously, that was damaging, extremely damaging.

Then, he used the family to pile on, so he fans out the two horrible sons: Eric and Donald Jr. And then it was all over Fox and Daily Caller and all the alt-right shit, and then you know, two days later, the Department of Justice calls, and The White House and Jeff Sessions, and like I said for the first time in history, put an American citizen under a two-month investigation for conspiracy to assassinate the President of the United States.

She said that the experience made her realize how important solidarity among women is.

And I always say this, and my female friends get mad at me sometimes, but I go “Ladies, we have to learn from the gays!” Women, and I’m just going to say this, and I know they are going to get mad at me, we are not good at sticking together and mobilizing and legislating and actually getting things done and the LGBT community does that. So, you know, women unfortunately, we get caught up in our own infighting, which is also one of my missions I want to work on, but the gay community I feel like historically, you know, long before Stonewall, when the chips are down, the gays know when its time to fucking get together and actually take action.