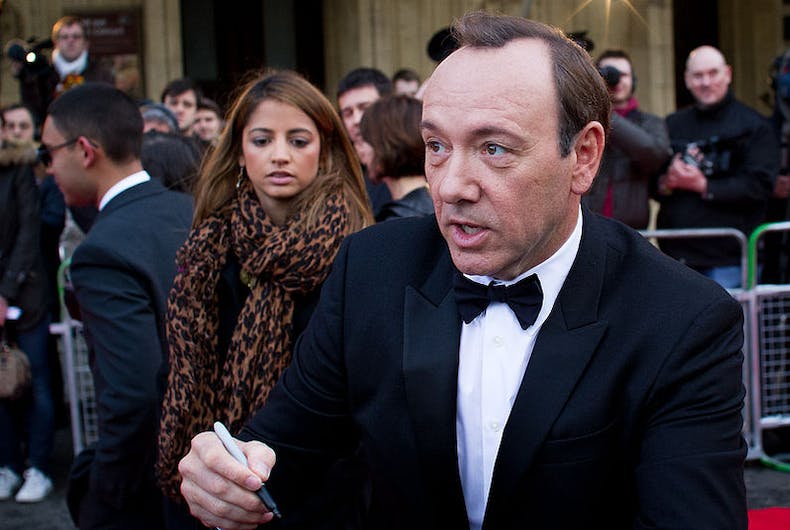 Kevin Spacey is being edited out of Ridley Scott’s upcoming film All the Money in the World and his scenes reshot with Christopher Plummer.

The movie, set to come out late next month, is based on the 1973 abduction of John Paul Getty III, and Spacey played Getty’s wealthy grandfather.

The unusual decision is being made amid continuing sexual assault and harassment allegations against Spacey, as well as many other men in Hollywood.

Spacey was first accused of inappropriate behavior by actor Anthony Rapp, who was 14 at the time of the alleged incident. He has since been accused by a number of other men, including Richard Dreyfuss’s son who said Spacey fondled him in front of his father.

He is currently seeking treatment while on a break from acting, but one imagines he won’t be making a comeback anytime soon, if ever.

Another allegation, in a growing list, has been lodged against Spacey.

Unruh said she failed to report the incident initially out of embarrassment, but that she has been emboldened by the sexual assault allegations against Spacey and other powerful men in Hollywood.

She has filed a police report and handed over evidence, she reported, and shared during a press conference yesterday that she hopes he is put away.

“To Kevin Spacey, I want to say this: Shame on you for what you did to my son. Shame on you for using your apology to Anthony Rapp to come out as a gay man. That was an appalling attempt to deflect attention away from what you really are: A sexual predator,” she said.