In her continuing effort to remove the stigma surrounding mental illness, Lady Gaga talked with the U.K.’s Prince William via Skype and their conversation was recorded by news cameras to be shared around the world.

“I wanted to ask you, very much, how you found speaking out and how it made you feel,” William asked Gaga.

“It made me very nervous at first,” the New York pop star told the heir to the British throne. “For me, waking up every day feeling sad and going on stage is very hard to describe. There’s a lot of shame attached to mental illness.”

William and his brother Harry are doing their part to boost a campaign spearheaded by his wife, Kate Middleton, the Duchess of Cambridge. It’s called Heads Together, and it aims to dispel the stigma which surrounds mental health. Led by The Royal Foundation in partnership with YoungMinds and seven other charities, the campaign released ten videos, of which this is one. Prince Harry revealed in a podcast interview that he has struggled with depression for 20 years since the death of their mother, Lady Diana.

William praised Gaga for the open letter she posted to her Born This Way Foundation’s website late last year:

I have wrestled for some time about when, how and if I should reveal my diagnosis of Post Traumatic Stress Disorder (PTSD). After five years of searching for the answers to my chronic pain and the change I have felt in my brain, I am finally well enough to tell you. There is a lot of shame attached to mental illness, but it’s important that you know that there is hope and a chance for recovery.

The pop icon also talked about her struggle with the illness in a visit with LGBTQ youth at the Ali Forney Center in New York City.

Gaga told William that to combat depression and anxiety, her coping mechanism is to say “this is a part of me, and that’s okay.” 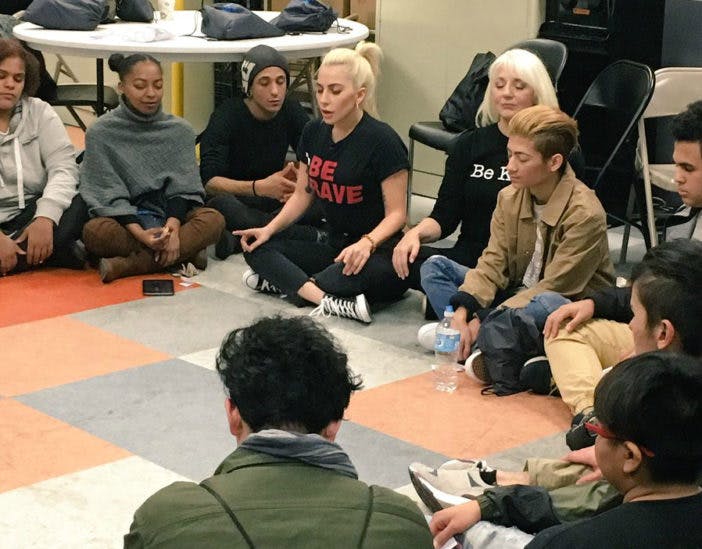