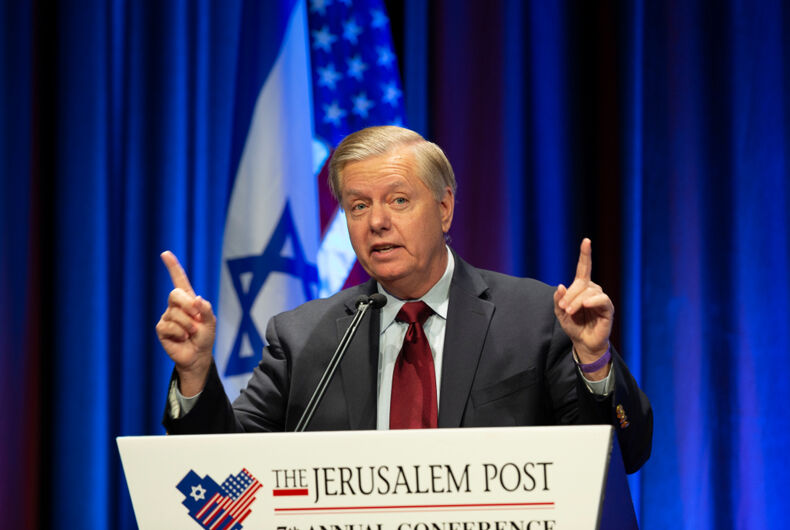 Sen. Lindsey Graham (R-SC) is talking tough, insisting that he owns an AR-15 rifle and knows how to use it to defend himself from “the gangs.”

Graham, who is allegedly known to D.C.-area male escorts as “Lady G,” opposes gun control measures advocated by Democrats, including a ban on the gun and others like it. The gun has been used in half of the ten deadliest mass shootings in modern U.S. history.

Related: Lindsey Graham threatens to “talk until I fell over” to stop LGBTQ civil rights bill from passing

“I would challenge him [Sen. Majority Leader Chuck Schumer (D-NY)] to bring the assault weapons ban to the floor of the United States Senate. It won’t get 50 votes, much less 60,” Graham told Fox News’s Chris Wallace.

“I own an AR-15. If there’s a natural disaster in South Carolina where the cops can’t protect my neighborhood, my house will be the last ones that the gangs will come to because I can defend myself.”

While Graham can talk tough about hypothetical thugs, he did the same thing about former President Donald Trump until Trump won the 2016 presidential election. Graham was a big supporter of the Trump administration.

Twitter, predictably, had thoughts about the senator’s bold stance and the sheer lunacy of his supposed worry about warlords taking over South Carolina after a hurricane.

“I own an AR-15. If there’s a natural disaster in South Carolina where the cops can’t protect my neighborhood, my house will be the last one that the gang will come to, because I can defend myself.” — Lindsey Graham pic.twitter.com/PYTkLzvK1J

No, because they all heard about LG’s AR-15 and don’t dare go near Seneca. It’s just like how I keep polar bears from marauding my place in North CA by coloring my hair purple. Haven’t seen a single polar bear since moving here in 2018! It works!

I’ve lived thru 12 days without power after a hurricane. Typically we all help each other.

But, if that what he wants, he also underestimates how many people here also have an AR-15, and that if they were to form a gang, his AR-15 is not going to be a match for all of theirs.

Sorry I know it might seem snarky or catty but this is the only things that come to mind when I hear Lindsey saying that about guns and being ready for gangs ?????????? ???? pic.twitter.com/qMMJ6EpG3V

They live in these Rambo-esque fantasy worlds of fending off hostile hordes after a disaster.

But really, since they won’t fund FEMA nor any preparations for disasters, they will instead die trapped in the rubble of their homes with their guns out of reach.