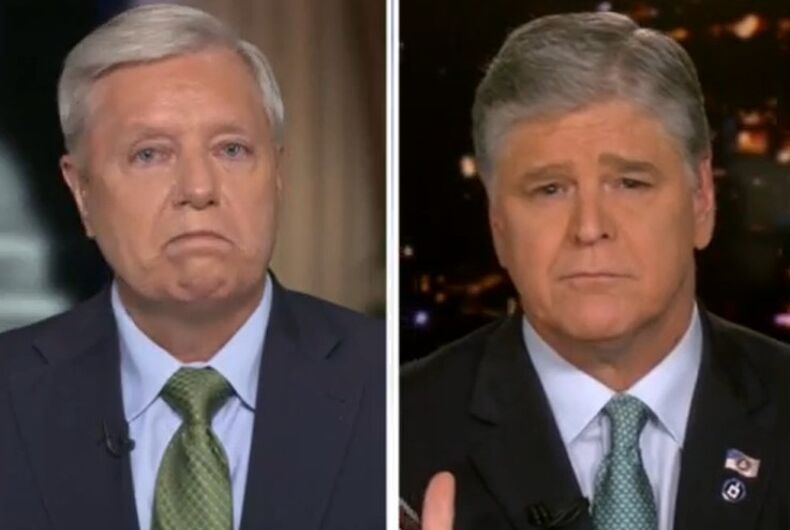 Sen. Lindsey Graham (R-SC) said that he will filibuster “till I fall over” to prevent the Equality Act from becoming law on Sean Hannity’s Fox News show last night.

“I would talk until I fell over to make sure that the Equality Act doesn’t become law, destroying the difference between men and women,” Graham said with a look of determination.

The Equality Act, which would expand existing federal civil rights protections to include LGBTQ people, passed the House last month and the Senate is now considering it. While Democrats hold a slim majority – 50 senators plus the tie-breaking vice presidential vote – under current Senate rules 60 votes are required to end a filibuster so that the chamber can vote on a bill.

This means that LGBTQ advocates have to find 10 Republicans to vote to end the debate on the Equality Act, or Senate Democrats have to end or restrict the filibuster.

Graham was on Fox News to talk about President Joe Biden’s proposal to make the filibuster harder. Currently, a senator who filibusters a bill doesn’t actually have to talk endlessly or read the phone book to run out the clock on a bill, as often depicted in movies. Instead, they can just have a staffer send an email saying they have an objection to a bill and that counts as a filibuster.

Biden proposed actually making them talk: “Back in the old days, you had to stand up and command the floor.”

“It’s getting to the point where, you know, democracy is having a hard time functioning,” he told ABC News this week.

Graham said that he would do anything to stop Democrats from passing the For the People Act (H.R. 1) – which would expand voting rights, end gerrymandering, and strengthen ethics rules for elected officials – and the Equality Act, both Democratic priorities.

“Here’s what Biden needs to understand: if you go to the talking filibuster, we will take the floor to stop H.R. 1,” Graham said. “I will talk till I fell over, to make sure that we don’t go to ballot harvesting and voting by mail without voter ID.”

Hannity asked if Democrats could get rid of the filibuster, and Graham frowned and shook his head “no.”