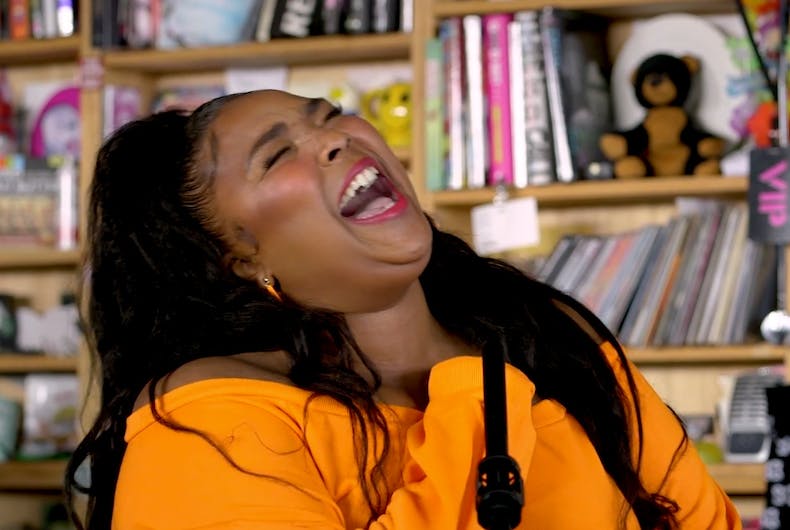 Lizzo belts out a tune during an appearance on NPR’s “Tiny Desk” seriesPhoto: Screenshot

While her initial song “Cuz I Love You” is addressed to a man and her final song “Juice” refers to a man who “got lost in [her] DMs” (direct messages), rap star Lizzo has become one of the LGBTQ community’s strongest allies.

On a recent turn on NPR’s hit “Tiny Desk” series, she set a high bar for supporting transgender and gender nonconforming people. There’s also a good possibility she set a record for the number of curse words used in the space of 16 minutes.

The plus-sized performer sang three songs from her new album – “Cuz I Love You,” “Truth Hurts,” and “Juice” – behind what she deemed a “tiny tiny ass desk.” But in between the singing, she gave the audience a slyly humorous running commentary that was deeply inclusive.

Related: GOP pressured NPR into firing a journalist who reported on their bigotry

After the second song about heartache and the end of a relationship, she asked the audience, “You fuckboi free too? Fuckgirl free? Fuckthem, fuckthey free? It’s an amazing place to be when you so free, am I right?” As the audience laughed, she then said while pointing to different audience members off-screen, “I like you girl with the middle part… and you, y’know. My girlfriend.”

In the middle of “Juice,” she busted out an absolutely sickening flute solo. If you only know Lizzo for her rapping, be sure to listen to the first tune she performs, because gurl can belt out the notes like a true diva.

“My shows are very inclusive safe spaces for everyone, especially marginalized people, more specifically the LGBTQIA+ community,” Lizzo told Variety earlier this year. “The message is loud and clear. It’s called Pride, not hide. Everybody, more than ever, is wearing their hearts on their sleeves and wearing their messages on their backs. I think we all know what’s up. We all can feel it right now. It’s time to represent and it’s time to persist and keep going. There’s progress to be made and we’re moving forward.”

“I’m an ally, but you know what? Here’s what I’m going to say about sexuality. I think what we knew about LGBT, and then LBGTQ, and then LGBTQ+. There are so many more wonderful letters to add to the spectrum. In the future, we’re going to be like, ‘This binary box we were put in was really restricting’.”