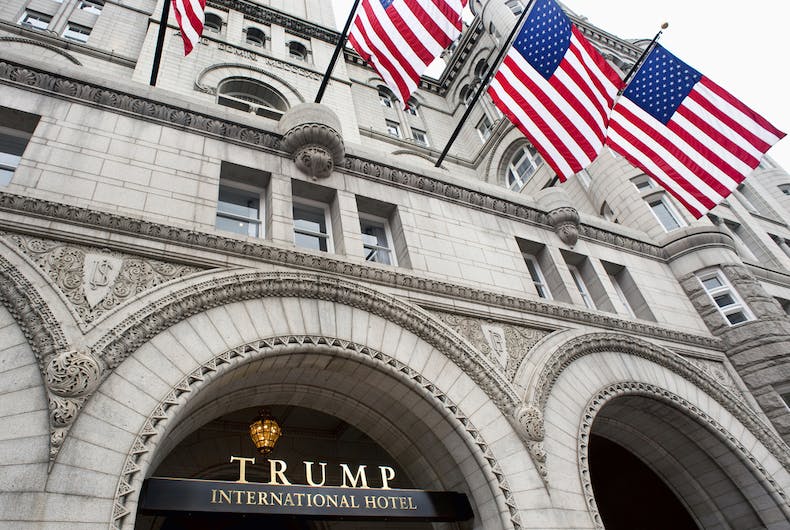 The Log Cabin Republicans celebrated their 40th birthday with a big bash at the Trump International Hotel in Washington DC, but one guest was conspicuously absent – President Trump. In fact, the president who promised to be the best friend of the LGBT community but has led one of the most anti-LGBT administrations wasn’t even mentioned.

Instead, Carly Fiorina, who ran against Trump in the Republican primary, gave the keynote speech. Trump infamously derided Fiorina as too ugly to be President during his sexist and xenophobic rampage into office.

According to Chris Johnson at the Washington Blade, Fiorina mostly avoided talking about LGBT issues in favor of “a heavily autobiographical speech on moving from being a secretary to CEO that sought to inspire leadership goals among those at the dinner.”

Fiorina is also not generally considered a friend to the LGBT community. While she told a story about a former openly gay co-worker who succeeded at his job when his employers allowed him to work a sales job, Fiorina opposed non-discrimination employment protections for LGBT people while she ran for president.

She also supported the Indiana law that would have allowed businesses to discriminate against LGBT customers, opposed marriage equality, and supported a constitutional amendment that would have banned gay and lesbian couples from marrying.

Gregory Angelo, the president of Log Cabin, denied there was anything unusual about the group pointedly ignoring the President while holding the event at a controversial location bearing his name. President Trump has come under constant criticism for continuing to refusing to put his assets in a blind trust – allowing foreign governments and citizens to curry favor from the administration by putting money in his pockets every time they stay or hold an event at one of his properties.

“I don’t think that’s out of the ordinary,” Angelo told the Blade. “We certainly don’t shy away from talking about him. We have an event in the hotel that bears his name tonight, so the focus of tonight was two things: It was Carly Fiorina, and it was Log Cabin Republicans’ 40th anniversary. That’s it. And that’s what was driving the messaging tonight.”

“This was not about stoking more divisions within the GOP, or even amongst our members. It was about being unified in celebration of our four decades, and I think that’s what we saw here tonight.”