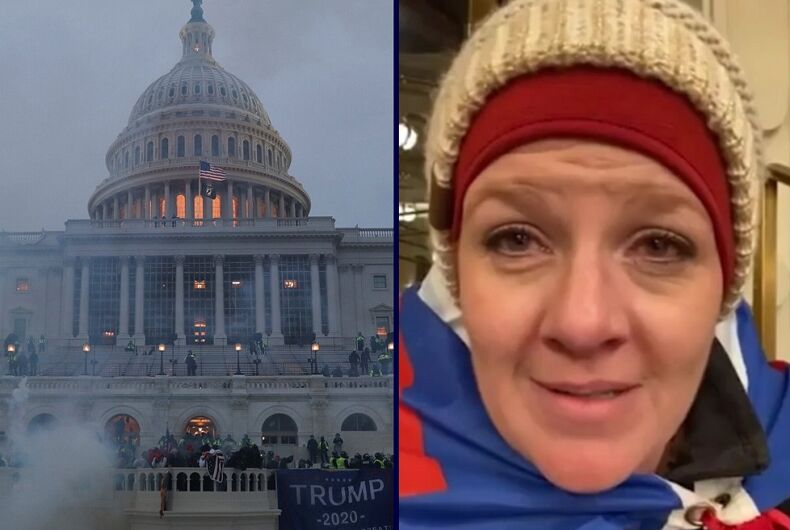 Vacationing in Mexico during a global pandemic isn’t just for gay party-goers in Puerto Vallarta anymore; a woman who was allegedly part of the January 6 MAGA riot at the Capitol is asking a judge to let her take a leave of absence because she already booked a vacation.

According to the New York Post, Jenny Cudd of Midland, Texas told a federal court – where she is facing charges stemming from her alleged participation in an attempted coup that left five people dead – that she had already “planned and prepaid for a weekend retreat with her employees” in Mexico from February 18 to 21.

Related: Lesbian teen who got kicked out by family turns them in as possible MAGA rioters

Cudd, who ran for mayor of Midland in 2019, posted a 25-minute Facebook video of herself at the Capitol during the riots where she admitted to having committed several crimes.

“We didn’t vandalize anything but we did, as I say that, we did break down Nancy Pelosi’s office door and someone stole her gavel and took a picture sitting in the chair flipping off the camera, and that was on Fox News,” she said in that video, with a Donald Trump flag tied around her shoulders.

“Fuck yes, I am proud of my actions. I fucking charged the Capitol today with patriots today,” she said.

In the video, she teared up when she explained why people were trying to violently overturn the results of the 2020 election: “My heart breaks for my country.” She also called the rioters a “bunch of red-blooded American patriots that actually give a shit about our country and keeping it.”

In a picture taken by a Getty photographer, she could be seen in the Capitol Rotunda with a phone in front of her face, possibly recording the video.

But when reached by local media later that day, she claimed she didn’t break any laws and that it was actually “Antifa members” who engaged in violence at the Capitol.

This week, Cudd told the court that the flower shop she owns is having “a work-related bonding retreat for employees and their spouses.”

She is facing two charges in connection to the MAGA riots and a federal magistrate already allowed her to be released pending her trial. But she needs permission to leave the country.

Cudd has previously protested against mask mandates and other coronavirus prevention measures, so she probably isn’t all that concerned about how a multi-family, weekend-long retreat could spread the virus.