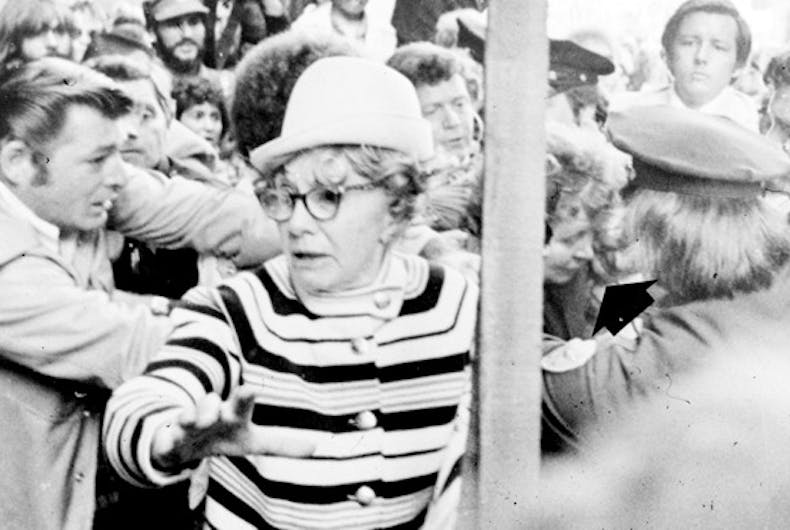 Oliver “Billy” Sipple was a a gay marine who saved President Gerald Ford from an assassination attempt.Photo:

As the U.S. Marine Corps celebrated its 241st birthday on Thursday, the occasion was devoid of any mention of one of the few people in history credited with saving the life of a President of the United States — gay Marine PFC Oliver “Billy” Sipple.

In San Francisco on September 22, 1975, Sipple was among a group of people watching President Gerald Ford exit the St. Francis hotel, including would-be assassin Sara Jane Moore. After her first shot at the President missed, Sipple lunged, pushing her arm down and causing her second shot to fail, too.

He tried to subdue fame and even asked police not to release his name, but they did. “Man who saved Ford says he is no hero,” read the Associated Press headline, and that’s exactly how he was hailed in multiple media stories around the world. And by the President whose thank you note read:

I want you to know how much I appreciated your selfless actions last Monday. The events were a shock to us all, but you acted quickly and without fear for your own safety. By doing so, you helped to avert danger to me and to others in the crowd. You have my heartfelt appreciation.

Then Billy’s longtime friend Harvey Milk outed him to a local columnist, and his heroism turned to hell as a second round of articles appeared. The week before Moore’s assassination attempt, there’d been daily TV and newspaper reports on the discharge hearing for fellow Vietnam veteran and Purple Heart recipient Air Force Sgt. Leonard Matlovich.

Now a syndicated column read: “We’re being asked to square our conception of the limp-wristed, effeminate ‘fag’ with that of medal winner Matlovich and life saver Sipple. If our stereotypes keep getting broken, we’re going to have to treat every person on his individual merits.”

It was also news to Sipple’s Detroit family that he was gay, and they and most they knew did not take it well. His father and brothers were ridiculed by coworkers at the GM auto plant where they worked, and his Baptist mother was harassed. According to his brother, the family lost friends when they found out.

“For two days they hassled her, wanting to know about her gay son and all this stuff,” his older brother George Sipple told The Washington Post in 2006. “And they didn’t believe her when she said he was in the Marines.”

For awhile his parents wanted nothing to do with him anymore. They eventually reconciled to a degree, though they never accepted his being gay as value neutral. And when his mother died four years later, George said, “his father made it clear that he was not welcome. He could go to the funeral home or the cemetery, but not when his father was there.”

Billy’s life was already troubled. While being treated for wounds in Vietnam, his hospital was bombed, and he returned to the States with a Purple Heart, PTSD, and a 100 percent disability rating. He was so classically shell-shocked that he asked to be admitted to the quiet insulation of San Francisco’s VA Hospital every Fourth of July because, like many combat veterans, the sound of fireworks freaked him out.

He filed an invasion of privacy suit against seven newspapers, saying in a deposition, “I have a lot of stress, and I take it out on booze.” But a state appellate court ruled against him, finding his sexual orientation was a legitimate part of the story.

Sipple’s story is retold in journalism schools and discussions about the right to privacy. There was even mention of it in the movie, Absence of Malice. The reporter portrayed by Sally Field wrote a story that prompted the subject to commit suicide. The editor tried to console her by telling about ‘the guy in the crowd’ who ‘saved the President’s life.’

‘Turned out he was also gay. That’s news, right? Now the whole country knows that too,’ the editor in the movie said.

Billy didn’t commit suicide, at least not in the usual sense. But he drank more and more, his weight ballooning to 300 pounds by the time he died alone of pneumonia at 47 in a cheap, cluttered Tenderloin apartment, his body discovered several days later. Above it still hung the framed letter from President Ford.

In addition to a condolence letter to his family, the former President sent a letter and flowers addressed to “The friends of Oliver Sipple” in care of one of his favorite hangouts, the New Bell Saloon, saying he would be “forever grateful,” and:

Mrs. Ford and I express our deepest sympathy in this time of sorrow involving your friend’s passing. I strongly regretted the problems that developed for him following this incident. It saddened me to learn the circumstances of his death.

Before his own death in 2006, Ford had endorsed the goals of the short-lived gay Republican group, Unity Coalition. Possibly for lack of funds, the man who’d saved his life was buried in Golden Gate National Cemetery south of San Francisco rather than Arlington in Virginia like he’d always hoped. His standard military headstone reads, OLIVER W SIPPLE PFC US MARINE CORPS VIETNAM NOV 20 1941 FEB 2 1989.

In 1975, the military discharged at least 937 people simply for being gay like Oliver “Billy” Sipple.