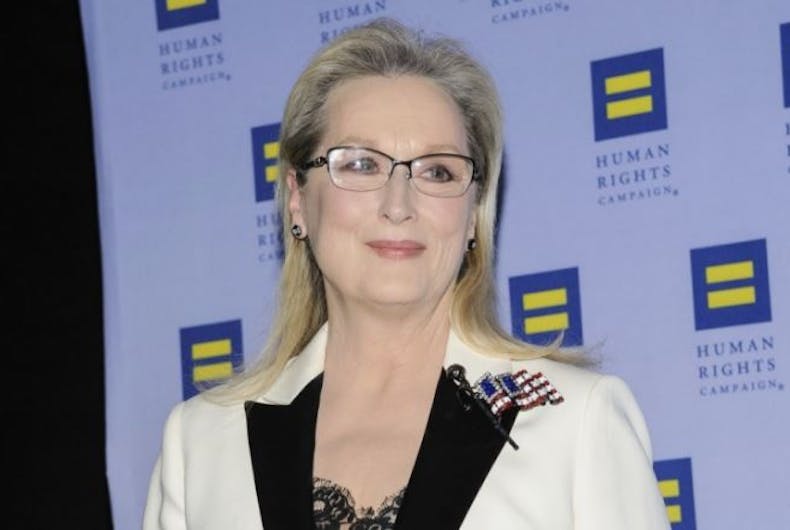 Meryl Streep drew a healthy dose of both accolades and criticism over her speech at the Golden Globes in January, wherein she took aim at President Donald Trump.

Streep went after Trump yet again on Saturday in an emotional speech in New York at a fundraising gala for the Human Rights Campaign, where she accepted the National Ally for Equality Award.

One of her biggest critics, unsurprisingly, was the president himself, who called her “overrated” in a tweet after the Golden Globes speech, despite having previously said she was one of his favorite actresses.

He also called her a “Hillary flunky who lost big” and denied the charge that he mocked disabled reporter Serge Kovaleski while on the campaign trail.

She added that while she wished she could stay home, “and load the dishwasher,” that “the weight of all these honors” she’s received over the years has compelled her to speak out.

“It’s terrifying to put the target on your forehead,” she admitted. “And it sets you up for all sorts of attacks and armies of brownshirts and bots and worse, and the only way you can do it is if you feel you have to. You have to! You don’t have an option. You have to.”

“We should not be surprised that fundamentalists, of every stripe, are exercised and fuming,” she continued. “We should not be surprised that these profound changes come at a steeper cost than we originally thought. If we live through this precarious moment, if his catastrophic instinct to retaliate doesn’t lead us to nuclear winter, we will have much to thank our current leader for. He will have woken us up to how fragile freedom is. The whip of the executive, through a Twitter feed, can lash and intimidate, punish and humiliate, delegitimize the press and imagined enemies with spasmodic regularity and easily provoked predictability.”

She remembered a middle school teacher who was transgender, and honored his braveness for living openly at a time and place where to do so was anything but easy.

“You had to have a special kind of courage to do it. Some of my teachers were obliged to live their whole lives hidden, covertly. But my sixth- and seventh-grade music teacher, Paul Grossman, was one of the bravest people I knew,” Streep said.

She also seemed to acknowledge the reports of a possible Trump “religious freedom” executive order that could come after LGBTQ rights, said to have been halted by Ivanka Trump and Jared Kushner after public backlash but is still a possibility going forward.

There is also the lingering threat of the First Amendment Defense Act, another so-called “religious liberty” bill that could soon find its way into Congress, and that Trump has pledged to sign should it pass.

“We have the right to live our lives, with God or without, as we choose,” she said. “There is a prohibition against the establishment of a state religion in our Constitution, and we have the right to choose with whom we live, whom we love and who and what gets to interfere with our bodies. As Americans, men, women, people, gay, straight, L, B, G, T, Q, all of us have the human right to life, liberty and the pursuit of happiness. And if you think people got mad when they thought the government was coming after their guns, wait till they come and try to take away our happiness!”

Watch Streep deliver her remarks in the video below.

You can read the transcription of her full remarks via The Hollywood Reporter here, at the bottom of the article.