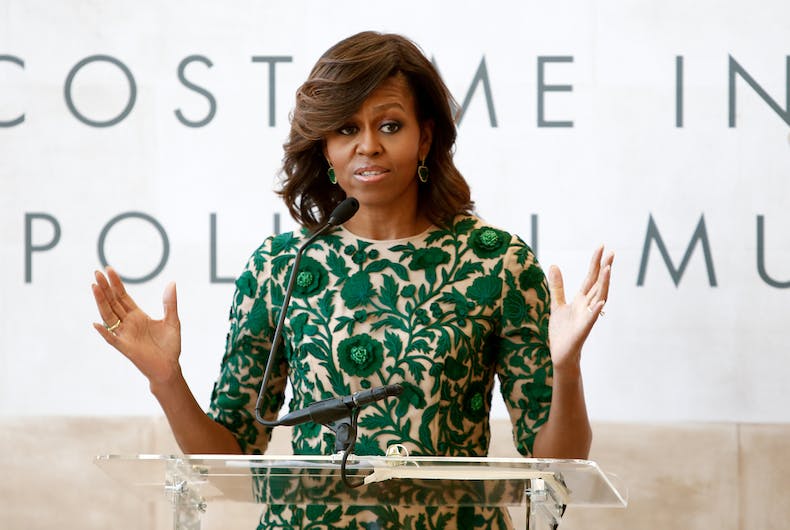 Former First Lady Michelle Obama is touring to promote her memoir, Becoming, and during a recent appearance in London, she set tongues wagging with an incredibly apt description of President Donald Trump.

“We come from a broken family, we are a little unsettled,” Obama said, according to The Independent. “Sometimes you spend the weekend with divorced dad. That feels like fun but then you get sick. That is what America is going through. We are living with divorced dad.”

Or, as Jezebel described the back and forth, she “compared Trump supporters to excitable children who mistakenly thought spaghetti for breakfast every day wouldn’t get old. (The spaghetti in this scenario is white people’s enthusiasm for racism.)”

Obama was interviewed on stage by late night host Stephen Colbert. About 15,000 people attended the event.

Related: Michelle Obama snuck out of the White House to celebrate marriage equality with crowd outside gates

While she didn’t mention Trump by name, it was clear that she was juxtaposing the current president with her husband’s tenure as the leader of the free world.

“For anyone who had any problems with Barack Obama, let’s just think about what we were troubled by – there were never any indictments,” she said.

She also said the world is in “a dark place” before a better future and offered the audience some self-care tips.

“When I am not emotionally able to deal with it I turn it off for a moment,” she said. “I only let some of that stuff into my world when I’m ready. You can’t have a steady diet of fear and frustration coming in.”

“This may feel like a dark chapter but any story has its highs and lows but it continues. Yes, we are in a low but we have been lower. We have had tougher times, we have had more to fear. We have lived through slavery, the Holocaust and segregation.”

“We have always come out at the other end – better and stronger,” she concluded. “We are moving in a direction of diversity and inclusion. No one ever said it would be easy. We are just in the throes of the uneasy path of change.”