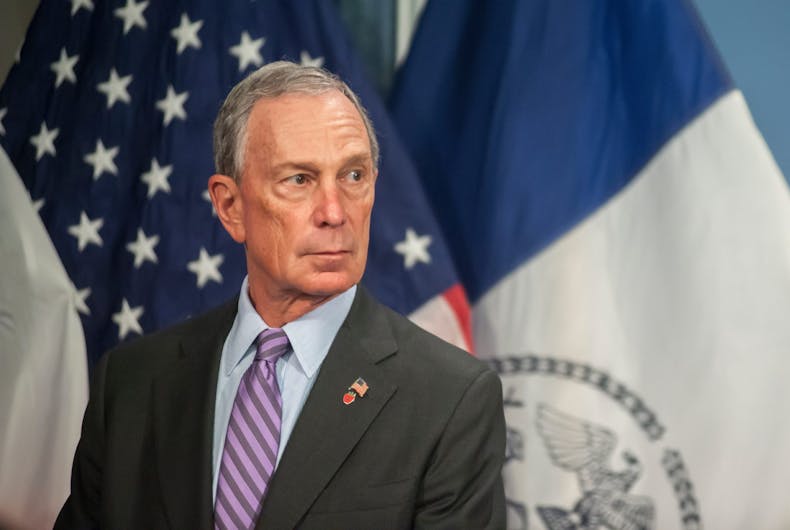 Mayor Mike Bloomberg prior to a bill signing ceremony in the Blue Room in City Hall, January 7, 2013.Photo: rblfmr / Shutterstock.com

When he entered the presidential race last November, former New York City Mayor Mike Bloomberg was considered a long-shot at best. A billionaire who made his fortune building a financial services and media company, Bloomberg was coming to the race late and with minimal name recognition.

His strategy was unusual, to say the least: skip the high-profile, early-voting states and zero in on the trough of delegates available on Super Tuesday.

Related: New York Times endorses both Warren & Klobuchar as ‘the radical and realist models’ for President

But never underestimate the power of money in politics. Bloomberg has been on the ascendant. A recent national poll put him in fourth place, ahead of former South Bend Mayor Pete Buttigieg. While Bloomberg was only polling at nine percent, that’s a remarkable jump.

Moreover, the other Democrats in the race are beginning to take notice. “At this juncture, when you can spend that amount of money on TV across the country, you do take it seriously,” one official with a rival campaign told the Daily Beast. “And he’s gotten a bump in the polls, so it is nothing to scoff at.”

Bloomberg’s strategy includes making a play for the LGBTQ vote. On a conference call with reporters today, Bloomberg touted his support for LGBTQ rights as “a fight and a cause I care deeply about.”

He cited his push for marriage equality, which he endorsed in 2005 before, as he noted, his competitors, and took credit for getting Republicans in the New York state legislature to pass a marriage equality bill. Echoing Sen. Kamala Harris (D-CA), Bloomberg also noted that he officiated at the first wedding at New York’s City Hall. (He didn’t mention that he put his money behind pushing for marriage equality in other states.)

Bloomberg’s plan for LGBTQ rights, which he unveiled today, hits many of the same points as the detailed plans put out by other candidates, including Buttigieg and Warren. The promises fall into five broad buckets: ensuring equal treatment in the workplace and communities; addressing health care disparities and ending HIV/AIDS; protecting LGBTQ youth; protecting LGBTQ people (especially transgender women of color) in the criminal justice system and in their communities; and restoring American leadership on LGBTQ issues at home and abroad.

Some of the promises are doable through executive action, like launching a Respect for All initiative to address school bullying. Others are uniquely Bloomberg, including funding an effort to help LGBTQ entrepreneurs get their businesses started.

And a lot of the policies are dependent upon Congress, including passing the Equality Act and supporting legislation to end conversion therapy for minors. As long as Republicans control the Senate, all of these initiatives are dead on arrival. (That’s a problem for all of the Democratic candidates, not just Bloomberg.)

Bloomberg’s biggest problem is one he shares with Buttigieg: skeptical black voters. As mayor, Bloomberg presided over a stop-and-frisk policy, which many minority New Yorkers (rightly) viewed as an excuse for harassment by police for not being white. He’s apologized for the policy, but the damage was already done.

Bloomberg’s biggest advantage is that he drives President Donald Trump crazy. He’s spending $10 million on ads during this Sunday’s Super Bowl mainly for the purpose of “getting under Trump’s skin,” a spokesman said bluntly. Bloomberg even ran an ad criticizing Trump that popped up whenever anyone searched for “impeachment” on Google. The thin-skinned president keeps taking the bait, tweeting about “Mini Mike” regularly.

If Bloomberg loses his quest for the nomination, he won’t be bowing out entirely. He’s promised to spend millions to defeat Trump, no matter who the nominee is. Perhaps that’s what scares Trump most of all. He knows money talks, and Bloomberg’s money is shouting “Get lost.”