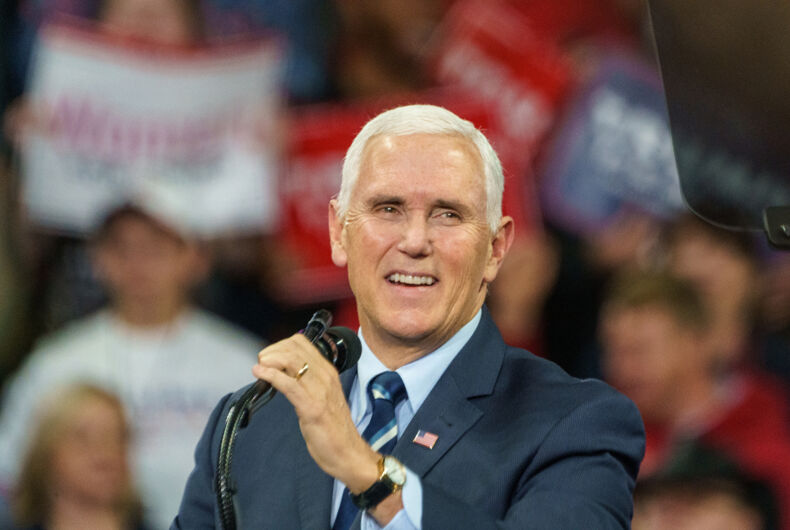 Former Vice President Mike Pence (R) is taking the next step in his quest for the presidency by launching a new political advocacy group meant to promote “traditional Conservative values.”

Kellyanne Conway and other Trump administration officials like Pence’s former Chief of Staff, Marc Short, will serve on the group’s advisory board. Before he was hired, Short publicly apologized for the repugnant comments he had made about people with AIDS.

Pence’s Advancing American Freedom group will focus on traditional religious right issues along with economic and foreign policy. Abortion and “religious freedom” advocacy against LGBTQ rights will be a large aspect of the group’s planned attacks on President Joe Biden’s progressive agenda.

“Advancing American Freedom plans to build on the success of the last four years by promoting traditional conservative values and promoting the successful policies of the Trump administration,” Pence said in a statement to the Washington Examiner. “Conservatives will not stand idly by as the radical left and the new administration attempt to threaten America’s standing as the greatest nation in the world with their destructive policies.”

The group reportedly has former President Donald Trump’s blessing despite their falling out after the MAGA riot at the Capitol building. As insurrectionists stormed the building, threatening to hang Pence for not unilaterally overturning the results of the presidential election, Trump remained silent while Pence was in danger. The two men reportedly did not speak again until after Trump left office.

Pence was mocked for his blind obedience to Trump, but he said that the group will tout his ties to the Trump administration as part of his effort to woo supporters to his camp.

“It was the most successful first term in American history,” Trump said in a statement sent to the Washington Examiner. “Nice to see Mike highlighting some of our many achievements!”

Pence, the former Indiana governor best known for his fierce opposition to LGBTQ rights, is reportedly also gathering support among religious right leaders and organizations to serve as the bulwark for his campaign.