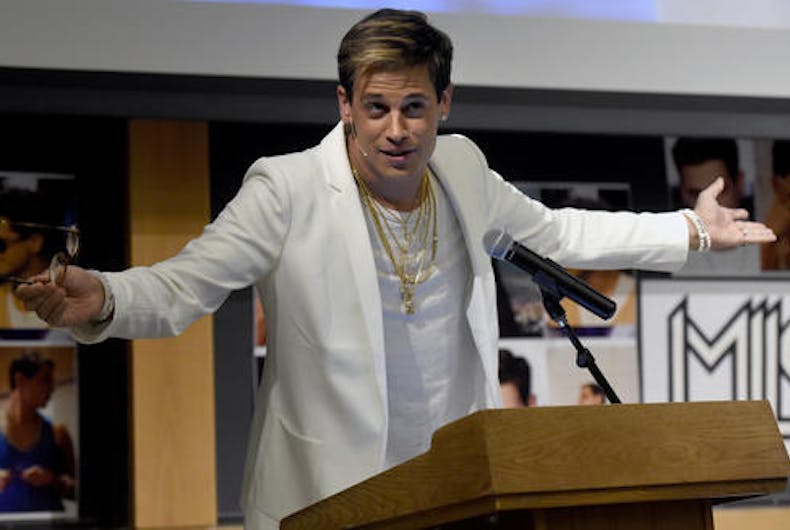 FILE – In this Jan. 25, 2017 file photo, Milo Yiannopoulos speaks on campus in the Mathematics building at the University of Colorado in Boulder, Colo. Photo: (Jeremy Papasso/Daily Camera via AP, File)

Milo Yiannopoulos was sitting on top of the world.

Despite all his rhetoric attacking transgender people, feminists, Muslims, and immigrants, the right was learning to love him more and more.

He scored a major book deal with Simon & Schuster, and landed a speaking spot at the Conservative Political Action Conference (CPAC).

Then audio where he downplayed his own sexual abuse as a child and suggested those sorts of relationships between boys and older men can be beneficial to the child came to light, and suddenly everything wasn’t quite so sunny.

He has denied the comments were in any way defending pedophilia, but the controversy forced him to resign from his job as a senior editor at Breitbart, and his book deal and CPAC slot went away just as quickly as they had arrived.

Yiannopoulos decided to self-publish his book, Dangerous, instead of finding a new publisher.

He has been actively talking up the success of the book, which was published on July 4, claiming sales were already through the roof.

Publishers Weekly reports Yiannopoulos’ public relations team told the publication that 100,000 copies, including pre-orders sold on Amazon on its release date. The actual numbers suggest something else.

“Outlets that report to BookScan, including Amazon, reported a total of 18,268 copies sold in the book’s first week,” Publishers Weekly notes. “The numbers place Dangerous third on the adult nonfiction list, and sixth overall in the country. The book hit #20 in the Apple iBooks store.”

“Amazon’s own lists tacitly corroborate these numbers,” the report continues. “While Dangerous was indeed the #1 bestseller and #1 new release on Amazon immediately following its July 4 publication, it is currently at #15 on Amazon’s new releases list.”

Related: Caitlyn Jenner’s memoir is already on the discount rack

According to The Guardian, the book was only able to move 152 copies in the UK.

But before you get too excited, all this “bad press” might be helping Yiannopoulos, as has so often been the case for him in the past.

In the two days since the Publishers Weekly article was published, Dangerous has risen to #7 on Amazon’s new releases list, and is at #5 on its list of most sold books of the week, at time of writing.

“By now, you may have heard reports claiming we only sold 18,000 copies of DANGEROUS and that our 100,000 copies claim is exaggerated. I’m happy to report that this is fake news,” Yiannopoulos wrote on Facebook.

“It’s true that the major booksellers only managed to ship out 18,000 copies to retail customers by the list cut-off. But that’s because they didn’t order enough ahead of time, and have been scrambling to play catch-up ever since.

“The real news is that we’ve received wholesale orders and direct orders of such magnitude that our entire stock of 105,000 books is already accounted for.”

This is actually Yiannopoulos’ second self-published book, the first being a collection of poems called Eskimo Papoose, written under the pen name Milo Andreas Wagner.

The work includes passages plagiarized from Tori Amos, Britney Spears, and Mariah Carey, and when called on it Yiannopoulos claimed the whole thing was satire.