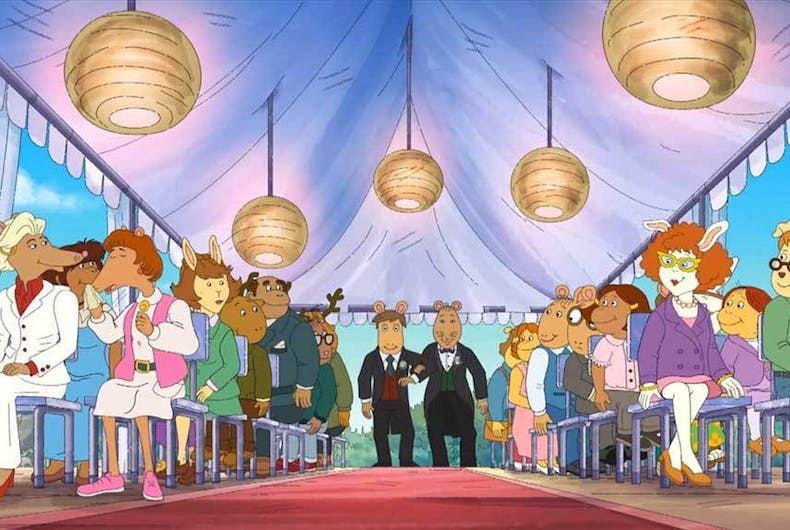 Arthur, the beloved 22-year-old series on PBS Kids, has just introduced its first queer character, Arthur’s teacher, Mr. Ratburn, who got married on yesterday’s season premiere. Watch it in full online—and learn why, even though he’s not the first queer character on children’s television, he still breaks new ground.

The series, based on the books by Marc Brown, features anthropomorphic aardvark Arthur and his friends and family. In yesterday’s episode, “Mr. Ratburn’s Special Someone,” the children learn that their third-grade teacher, Mr. Ratburn, is getting married, but they don’t know to whom. Still, one of Arthur’s friends opines, “Teachers don’t get married. It’s just wrong!” which leads to an amusing debate over whether teachers have any life outside the classroom. It’s not that the kids don’t want him marrying another man—it’s that they can’t envision him marrying anyone.

Later, they see Mr. Ratburn being berated by a strongly opinionated woman they assume is his fiancée (played by the wonderful and also queer Jane Lynch). They decide to split them up so she doesn’t “toughen him up” as promised—which they imagine could lead to extra homework assignments. They ultimately learn that she is his sister, in town for his wedding.

Related: ‘One Million Moms’ call for boycott of Disney over same-sex cartoon kiss

It’s a funny and sweet story, not only because of the same-sex wedding, but because it also shows that “toughening up” isn’t always desired for a man—without going overboard in the other direction and portraying Mr. Ratburn as an effeminate stereotype. The fact that he’s marrying another man is a complete non-issue. The students are more horrified by the fact that, at the wedding, one of their teachers is (gasp!) dancing.

The episode follows previous, sporadic efforts by PBS Kids to show queer characters. Most famously, they did so in 2005 on Postcards from Buster, where anthropomorphic rabbit Buster visits a maple sugar farm run by a two-woman couple. Then-President George W. Bush’s secretary of education, Margaret Spellings, denounced the episode and asked the show’s producers to return all federal funding. Producer Jeanne Jordan told the New York Times that the controversy made it difficult to find funds for a second season.

More recently, the venerable Sesame Street has shown kids with same-sex parents in a few of its episodes. Disney Junior’s Doc McStuffins, produced by Chris Nee (a lesbian mom herself), featured a two-mom couple in one episode in 2017. A few shows on other networks, such as the Cartoon Network’s Steven Universe and Clarence, Nickelodeon’s The Loud House, and Amazon’s Danger and Eggs, have ongoing queer characters. And cable service Xfinity On Demand last year launched a Kids & Family collection within its LGBTQ Film & TV collection on Xfinity X1, featuring Mombian recommendations. When they launched this service, I wrote a piece for them further detailing LGBTQ representation in children’s media. I hope you’ll go have a read.

Even more notably, the episode features a queer teacher—at a time when many teachers still struggle with how much of their sexual orientation or gender identity to disclose at their schools and debates rage about LGBTQ inclusion in the curriculum. Count this doubly because of PBS Kids’ previous run-in with the Department of Education over queer content.

Bravo to them for stepping up now, especially when the current Department of Education is no friend to LGBTQ students. As Arthur’s sister DW says about their teacher getting married, “It’s a brand new world.”

Expect outrage from the ultra-right about this—and get a jump on them by writing to PBS Kids now to tell them you support the show (and want even more LGBTQ content in children’s television).

Watch the episode in full here.

Dana Rudolph is the founder and publisher of Mombian, a GLAAD Media Award-winning blog and resource directory for LGBTQ parents. Find her on Twitter @mombian and on Facebook.

Cancel reply
Mr. Ratburn came out & got married on the children’s cartoon ‘Arthur’