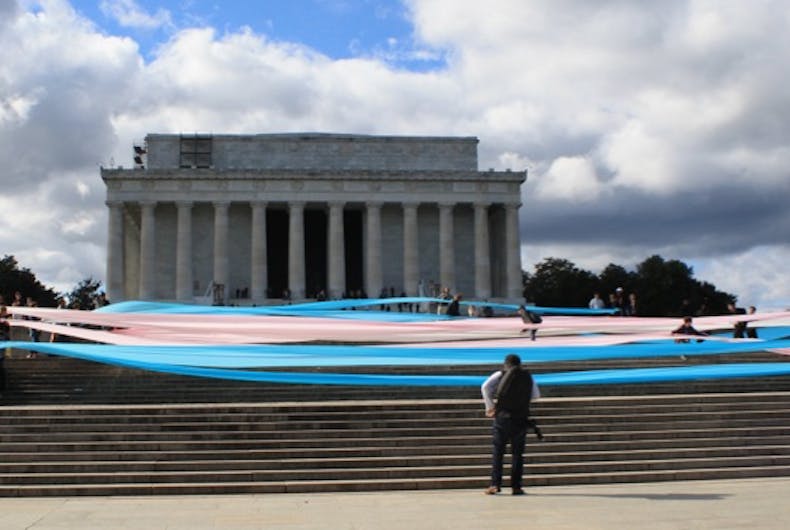 Activists unfurled a 150-foot trans flag on the steps of the Lincoln Memorial to protest the Trump administration’s attacks on transgender people.Photo: National Center for Transgender Equality/Twitter

As President Donald Trump’s attacks on the trans community continue, the National Center for Transgender Equality (NCTE) has faced multiple bomb threats over the past few months. Trump’s vicious rhetoric and blatant racism have spawned a dramatic uptick in the number of hate crimes and domestic terrorism attacks in the United States.

After an investigation from the Washington Post revealed that Trump’s handpicked US Attorney, Jessie K. Liu, hasn’t been prosecuting hate crimes in the nation’s capital despite the increase of reported attacks, even more information about the sorry state of affairs in the District are coming to light.

One of the egregious examples are the multiple bomb threats that have been endured by NCTE. As the largest and most prominent national group, they’ve become the face of the transgender rights movement during a time when the administration has worked doggedly to strip the community of legal recognition and basic humanity.

In December of 2018, the organization received three threats in less than 24 hours.

The city has seen a dramatic increase in the number of hate crimes against black transgender women in particular.

“While I recognize the relative newsworthiness of threats against a national organization, we are far more concerned – and would urge reporters to be far more concerned – with the epidemic of violence impacting transgender people who do not have the privilege of a public profile and institutional capacity,” NCTE media relations manager Gillian Branstetter told the Washington Blade.

In 2017, D.C. police arrested suspects in 59 hate crimes, the U.S. Attorney’s Office for D.C. — “which handles most criminal cases in the capital,” the Post notes — only prosecuted three as hate crimes and it later dropped one of the prosecutions.

“Of the 178 suspected hate crimes in 2017,” the Post writes, “police closed 54 cases involving adults by arrest. Prosecutors charged two cases as hate crimes, and both were later dropped as part of plea deals.”

The threats against NCTE were not publicly revealed before the Post investigation. No one has been arrested.