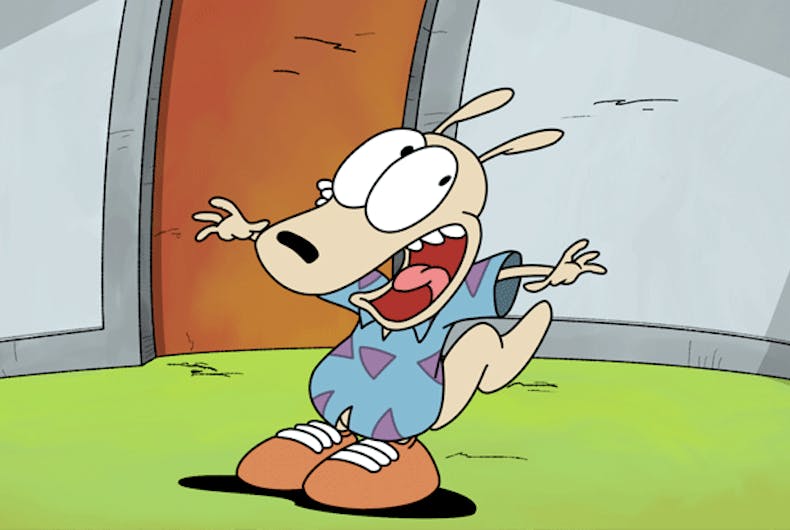 Netflix is rebooting the 90’s cartoon “Rocko’s Modern Life” with a movie that will feature a story arc about transgender people.

“Rocko’s Modern Life: Static Cling” will show Rocko and his two best friends returning to Earth after blasting off to explore the universe in the series finale. A lot has changed since the 90s, including their friend Ralph – who is now Rachel.

“When I started writing [Static Cling], I really started latching onto the idea of change and how society has changed and what’s gone on in the last 20 years and the development of our characters and how they would react to change,” series creator Joe Murray told Entertainment Weekly. “It felt natural, because it was not only about change, about somebody finding who they are and making that courageous choice to go through that change.”

Murray will return to voice Rachel after voicing the original character on the show.

Related: Mr. Ratburn came out & got married on the children’s cartoon ‘Arthur’

While several cartoons have featured LGBTQ storyline and characters now, “Rocko’s Modern Life” was groundbreaking during its original run. A 1996 episode showed a character struggling to “come out” as a clown in a town that hated them. Murray confirmed to the outlet that it was meant as an allegory for coming out as gay.

“We were still playing by the rules, so to speak, and still trying to interject those situations [into the cartoon],” he told EW.

The storyline will show the characters set off to find their friend who left her family on a mission of “self-discovery.” Her family hasn’t seen her in years and her father has a hard time accepting her as trans, but Rocko and his gang of friends quickly adapt.

“’Rocko’s Modern Life: Static Cling’ tells a beautiful — and hilarious — story about accepting change,” Nick Adams, GLAAD’s director of transgender representation, told the outlet. “The younger characters accept Rachel immediately; recognizing she’s still their friend. And while Rachel’s father is slow to accept change within his own family, even he realizes that loving your child should be unconditional. This story of inclusion and acceptance is so needed in our current climate.”

Adams consulted with producers on the film.