The good part about Mark Lilla’s New York Times column calling for a “post-identity liberalism” last Sunday is that he touches on the fundamental difference between the European and the American lefts. The bad part is that he draws the wrong lesson from that difference.

The short version of Lilla’s column is that he’s sick of hearing about the blacks and the women and the gays and what-have-you, so the Democrats should spend more time talking about straight, cis white dudes.

Scott Lemieux explains why Lilla’s advice isn’t actually helpful; I would only add that ignoring three large Democratic voting blocks – women, African Americans, and LGBTQ people – is not a great way to increase turnout for Democrats.

What struck me was where Lilla is right:

Recently I performed a little experiment during a sabbatical in France: For a full year I read only European publications, not American ones. My thought was to try seeing the world as European readers did. But it was far more instructive to return home and realize how the lens of identity has transformed American reporting in recent years.

After living for a decade in France, I’ve found this to be generally true. European politics, which covers as diverse an array of topics as American politics, is fundamentally a story of class. Sure, the right is anti-immigrant and generally less favorable to feminism, but if you had to pick one thing that the left/right divide is about, it’s class.

In the U.S., it’s about white solidarity. If you think that the white race deserves special privileges, or just that the advancement of the interests of white people is more important than other things, then you’ll probably vote Republican. While there are lots of issues that are important and people vote for who they vote for for complicated reasons, the fundamental line along which we organize is racism, and has been for quite a while: the 3/5 Compromise, the Civil War, Reconstruction, the realignment of the South to solidly Republican after the Civil Rights Act was passed… it’s all about that one thing.

But the lesson Lilla draws from this is all wrong. For example:

But it is at the level of electoral politics that identity liberalism has failed most spectacularly, as we have just seen. National politics in healthy periods is not about “difference,” it is about commonality. And it will be dominated by whoever best captures Americans’ imaginations about our shared destiny. Ronald Reagan did that very skillfully, whatever one may think of his vision.

Reagan famously founded his campaign for presidency in 1980 on racism against African Americans. Even though he supported the ERA as governor of California, he opposed it when he ran for president. To say that he was about “commonality” is to re-write history; Reagan was focused on difference and how to ensure that one group of people gets treated better than others. 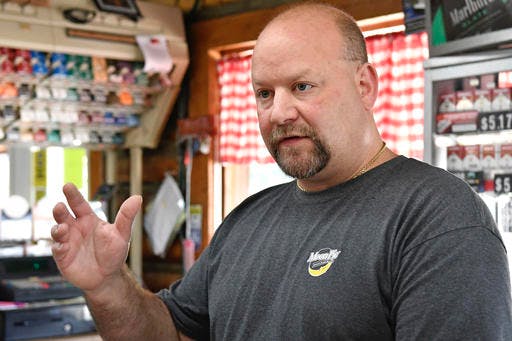 Myron Lewis, a resident of Elliott County Ky., explains why he believes that the county supported Donald Trump. Thursday, Nov. 10, 2016 in Sandy Hook…

Cancel reply
No, Democrats don’t need to be more white and male