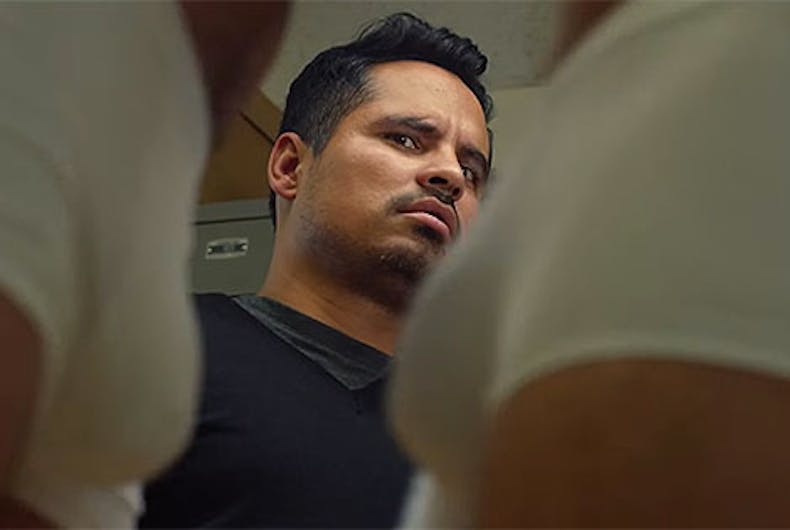 CHiPs is the latest TV retread to hit movie theaters, and from those who’ve seen it, the prevalent theme is a shameful revisit to the bad old days of gay panic.

Even in the trailer, the characters played by Michael Pena and Dax Shepard — who also wrote and directed the film — repeatedly refer to homophobia and frequently reference Pena’s insecurity about his heterosexuality, as if contact with another man might somehow be indicative of homosexuality.

As Katie Rife wrote about Pena’s portrayal of Ponch in AV Club:

He’s so straight, in fact, that he gets defensive and angry when he’s greeted by a man in his underwear, even if they happen to be in a locker room at the time. As Ponch explains it, it’s not homophobic to have a phobia of another man’s body, as long as the dude whose dickprint is squicking you out also isn’t gay. Hate to break it to you, Ponch, but internalized homophobia is still homophobia. And this movie relies so heavily on tired gay panic tropes, it’s almost a relief when it changes tacks for an extended riff on how hilarious it is to make out with ugly chicks. Almost.

Writer Matt Donnelly had this insight in The Wrap:

In another convoluted scene, Baker — looking severely banged-up thanks to his former job — has problems moving his joints when it rains outside, so Ponch must come help him into a warm bath. Ponch winds up face-planting in Baker’s crotch — a fate worse than death, apparently, for a character paralyzed on the spot when he sees women in yoga pants on the street.

This not to say that Shepard, who wrote and directed the feature film adaptation, means the LGBT community harm in his comedic approach — the script includes some interesting conversations about men and sexuality, though none remove the sting of cheap laughs at the expense of homosexuals.

The dudebros will no doubt laugh it up, but to anyone with sensitivity to LGBTQ issues, it’s just wrong.