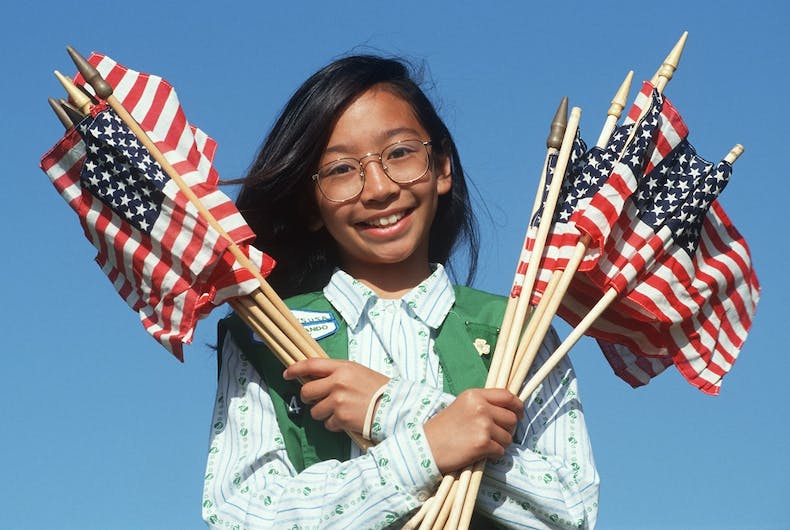 The Girl Scouts are destroying America, according to the Liberty Counsel.Photo: Shutterstock

Since the girls aren’t being taught to keep their mouth shut, breed babies, and clean house for their man, Kim Davis’ lawyers are seething.

The lawyers over at the Liberty Counsel are calling for a boycott of Girl Scout Cookies.

Why are these right-wing attorneys troubled by your Trefoils and sore about your Samoas? According to them, the Girls Scouts aren’t just pushing cookies; they’re part of a worldwide organization that “promotes abortion and promiscuous sex” to its members.

There don’t appear to be any merit badges for these things, but the big crime of Girl Scouts USA (GSUSA) is that it belongs to the World Association of Girl Guides and Girl Scouts (WAGGGS), which “demand access to comprehensive sexuality information, services and supplies for all young people.”

So they want young people to have the facts about sex, sexuality, and how to protect themselves. Even worse, they’re teaching girls that they have a voice and that they can use it to effect change. All over the country, Girl Scouts are doing just that.

In Aurora, Colorado, the city council recently passed a law that drivers caught smoking with a child under 18 in the car can be cited. It started as a Girl Scout project to create a city ordinance and take it to the council.

Girls researched similar laws in other states. Senior assistant city attorney Nancy Rodgers, helped them craft the legal language. Then they went to the council to advocate for their law. Most importantly, they learned a valuable lesson about making a difference

“Now, I’ve learned that it just takes a little bit of courage and knowledge and perseverance,” said Julianna Martin, who handed the ordinance to the mayor.

These girls aren’t just selling cookies. They’re learning skills that may be crucial to our political system in the future. Millions of Girl Scouts are taking on hacking and cybercrime as they work to earn the new cybersecurity merit badge.

GSUSA launched the new badge based on demand from girls themselves. It’s hoped that the badge will encourage girls to pursue careers in the STEM fields. Eventually, a total of 18 cybersecurity badges will be introduced at various skill levels.

To the suits at the Liberty Counsel, this all sounds like dangerous stuff: teaching girls that they can make an impact in the political system, showing them living examples of women in government, teaching them skills that may lead to promising careers.

To the rest of us, it’s a good reason to order an extra box of Thin Mints.