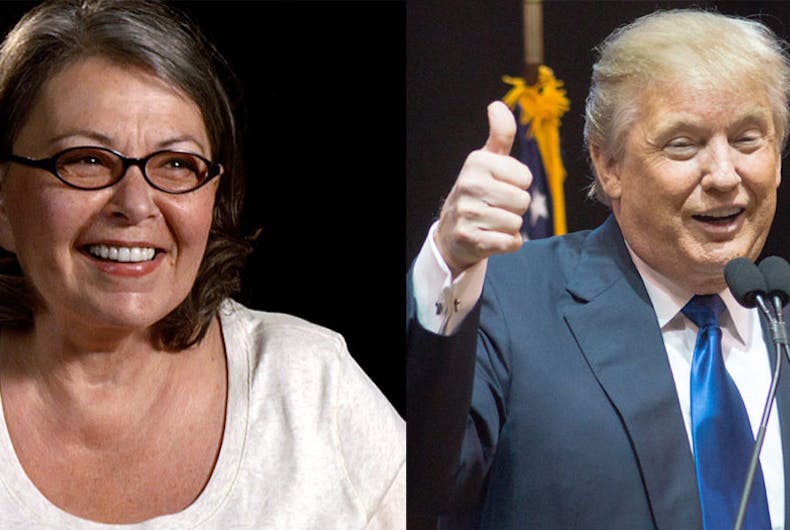 If there’s anything that President Donald Trump loves – in addition to Big Macs, getting spanked with magazines with his face on them, and his daughter Ivanka – it’s ratings. That is, if he thinks he can take credit, so it should come as no surprise that Trump was thrilled by the big ratings Roseanne garnered upon its return to the airwaves Tuesday night.

He was so pleased that the show netted 18.2 million viewers, second this season only to the show immediately following the Super Bowl, he personally rang up Barr to congratulate her on the numbers.

Barr is a Trump supporter in real life, as is her character on the show.

Related: Roseanne says ‘we’re lucky’ to have Trump as president

She still insists he is pro-gay, despite all available evidence to the contrary.

Barr is apparently convinced Trump is “not homophobic at all” simply on the strength of his saying so, despite appointing anti-LGBTQ Cabinet members, arguing businesses should be able to discriminate against the community in both hiring and in providing goods and services, and firing his HIV/AIDS council without warning.

She has defended the president in a number of interviews in the lead-up to the reboot’s debut, in spite of being cautioned in real time by cast-mates and handlers.

Barr has spread debunked conspiracy theories about the Clintons, and continues to push the idea that Trump was elected by working class people, when in fact he was swept into office on the basis of white identity politics more than on the basis of financial status.

She also has a history of making derogatory comments about transgender women.

The transgender community has been particularly under attack by the Trump administration, which recently unveiled its latest trans military ban.

Barr said she and the rest of the cast were hoping the ratings would justify a renewal of the reboot, meaning you should expect the Roseanne revival to continue.

At this rate, it might even outlast Trump’s presidency.

“I’ve known him for many years and he’s done a lot of nice things for me over the years. It was just a friendly conversation about work, and television and ratings.” pic.twitter.com/Moelf9BpS3