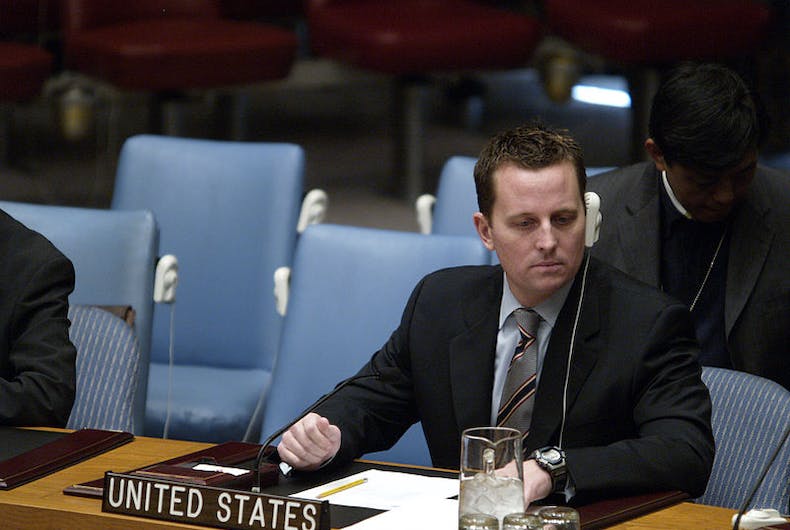 Donald Trump is reportedly considering Richard Grenell for U.S. ambassador to the United Nations, which would make him the first openly gay person to serve in that role.

Grenell, who is currently a Fox News contributor, served as spokesman to four US ambassadors to the UN under President George W. Bush. He also briefly served as a spokesman for Mitt Romney on national security and foreign affairs but resigned amid antigay attacks.

Grenell is considered to be a strong supporter of Israel, which might help quiet fears of anti-Semitism which have arisen, especially in the wake of Trump appointing former head of Breitbart Stephen Bannon as chief strategist and senior counsel.

Grenell was asked about his name being floated for an ambassador position by Fox’s John Gibson, to which he said he wasn’t sure where those reports were coming from but noted that he was “wildly supportive” of Trump and would do whatever he can to help him.

“The most important thing is change,” he added. “I am somebody who thinks Washington needs a big shakeup…we have to think differently.”

He wrote a piece for the Washington Times arguing that Trump would be supportive of LGBTQ rights, in spite of picking an antigay vice presidential candidate, pledging to sign FADA and promising to appoint far-right judges like late Supreme Court Justice Antonin Scalia.

“No other Republican Presidential nominee in history has embraced the LGBT community in such a loud and proud way,” Grenell wrote of Trump holding up an LGBT pride flag at a rally in Colorado. “And yet, the moment was barely reported by the media despite the fact it happened in front of the traveling press corps accompanying Mr. Trump. Political reporters, not unsurprising, largely failed to write on the moment where a Republican challenged their negative media stereotype.”

Things could get awkward if Trump appoints both Grenell and former House Speaker Newt Gingrich, who has also been floated as a possible cabinet member, considering some of the shade Grenell has thrown Newt’s way on Twitter.

The New York Post reports that he has gone after Gingrich repeatedly about his weight, as well the number of times he has been married. Someone call Melania, these boys are getting too rough.