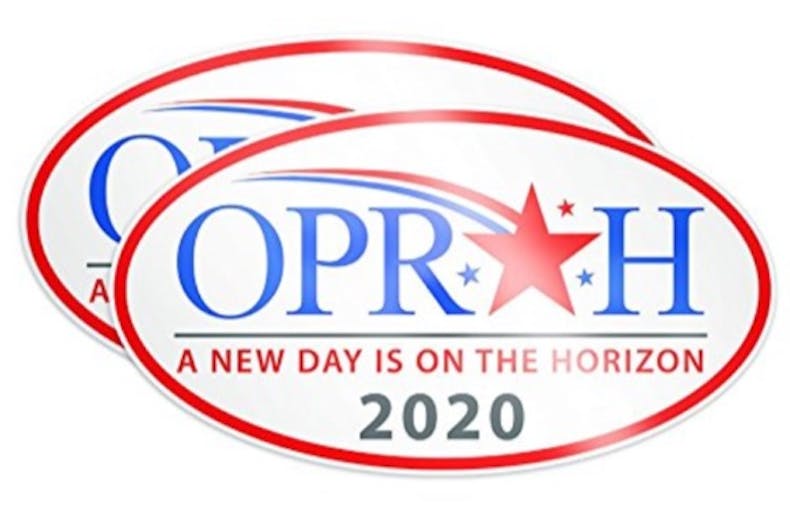 One of the first “Oprah for President” stickers to show up on onlinePhoto: Amazon

After Oprah Winfrey’s stirring speech at the Golden Globes, it didn’t take long for the internet to erupt in call for her to run for president. As talk of her non-existent candidacy swirled on social media, savvy capitalists decided to cash in.

You can now buy a bajillion “Oprah for President” items online. Oprah may not have declared her candidacy, but that won’t stop retailers from taking your dollars. Think of it as a donation to their campaign to get rich.

From stickers to baby clothes and coffee cups to t-shirts, those hoping to make a quick buck have flooded Amazon with merchandise to help you make a political statement. Check out a sampling of the best (and worst) below.

The ‘Oprah for President’ t-shirt

Simple enough, right? It might not be official, but it’s still an easy way to show your support for the Queen of Nice.

Okay, this cheap trinket is a good example why having someone around with a little bit of Photoshop knowledge can make you a ton of money. The quality kerning brings the text right to the edge of the sticker and there’s a good chance the one you get will be put on upside down. This definitely would not be one of Oprah’s “favorite things.”

The ‘Oprah for President’ coffee mug

This one is actually pretty good. The in-house designer is obviously a wee bit more capable than the person who did that pillbox above – and it’s only $12.95.

What in the hell is this? Yes, these are generic “vinyl stickers” meant for your Solo cup. Somewhere out there, Toby Keith is buying these by the fistful.

The ‘Oprah for President’ travel mug

Ooooooh. Classy. It’s a light color with a slogan, some stars, and decent design. That means quality for this sampling. It should too since at $29.99 it’s the highest price item on this list.

In the end, no one knows if Oprah is going to run for President. There are plenty of reasons why she should and why she shouldn’t. But in the end, if she does run against Trump in the next election, we all know the choice is clear.